1)The super efficient and easy to use transit system. The underground train was always on time, with clocks at every platform that counted down until the next arrival, and so clean you would've felt comfortable eating off the seats (if they allowed food and drinks on the trains, that is). Our EZ passes allowed us to sweep in and out with no hassle and even made us look like we knew what we were doing. Kinda.
2)Singapore's zoo is quite impressive. They've made significant efforts to afford the animals ample space and create a natural habitat for them. We were entertained by many new creatures that you don't find in Americans zoos too often, a few of our favorites being the mandrills, giraffes, and pygmy hippos. 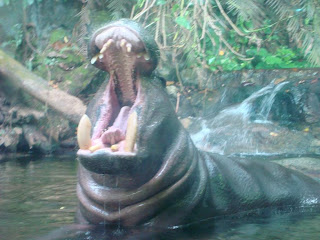 3)The timing of our visit. Without the many sights and festivities associated with Chinese New Year, Singapore would've received the same dimly glowing reviews from us that we hear from every other traveler. But there was lots of cool stuff going on while we were there, the highlight being the floral festival on Sentosa Island. (There are many pics you can check out in the Picasa folder). The crazy décor covering most of the city enhanced our experience as well. And Jer couldn't have been more stoked that the timing allowed us to catch the qualifying soccer match between Singapore and Jordan. 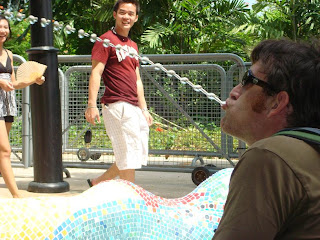 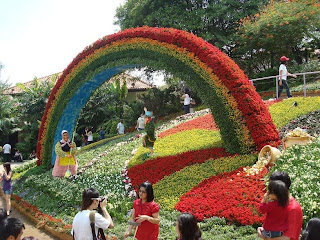 1)The food. I think you got the picture with “The Foodie Rings In” blog post!
2)What a stinky city! Yikes! Singapore seemed pretty clean overall, especially for such a big city. You'd expect that with all of the rules and restrictions though. Speeding = $1000 fine, chewing gum is illegal and = $5000 fine – are you kidding me?!? The fine for littering was crazy too but I don't remember exactly how much. But despite it's tidy appearance, the smells you'd encounter as you walked down the street were truly shocking. It smelled like a mixture of sewer, rotting fish, the Purina dog food factory in Reno, and the mill in Albany on your drive to Corvallis, all baking together in the heat and humidity. I wasn't kidding about the shocking part!
3)Singapore is a pretty expensive city in general, but the cost of beer was astronomical. One bottle of the national favorite, Tiger beer, (which is shit, by the way) was around $13. I think we saw it on happy hour for a steal at $10 each. We're ashamed to admit we passed up an entire country and didn't imbibe a single sip while there but the budget doesn't allow for those kind of prices! We promptly tried Tiger upon arriving in Malaysia to make up for it...and realized we hadn't missed much. And it cost us $4, still quite expensive by the standards we've become accustomed to! 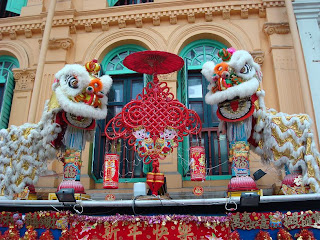 Posted by Courtney and Jeremy at 5:06 AM

"Pygmy Hippos" not found in America? Are you kidding me, Cornelius? We have the world's greatest selection and supply of white fatties that visit here in Nevada every weekend! They too are in their own environment at the all you can eat prime rib buffet; where the apparent challenge is to put as much on your plate as possible, while still being able to hold it with one hand so that one's other hand can hold an ice cream topped piece of triple stacked, double chocolate fudge cake. That said, I'd put Northern Nevada's white fatties against Singapore's anytime!!!
Have fun you guys and if the Singapore Pygmy Hippos are like ours, don't cut in buffet lines unless you want a meaty headlock from behind; unless you are totally into that.