The island of Pulau Tioman is off the eastern coast of peninsular Malaysia. Hop a coach from Singapore for about $20, knock out a few episodes of Lost Season 3 (Bucholz, thanks for buying those through our Itunes, by the way. They've provided many hours of lazy entertainment over the past few months.) and you arrive in Mersing. Once in Mersing you make a quick stop in to the local travel agent guy and pick up your fast boat tickets to the island. Two Dramamine, a few more episodes of Lost (damn, they're almost over!!) and almost two hours of bone-chillingly cold AC later, you're there. 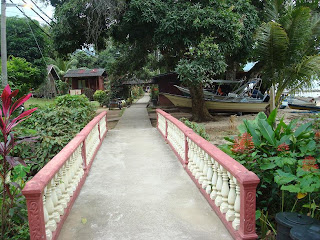 Kick your way up the sandy sidewalk and find a nice little hut just off the ocean for ten or twelve bucks a night. We stayed the first few nights in the small, northern village of Air Batang (ABC). Our place was simple with a bed, cold shower, no-flush toilet, fan and friendly? resident giant frickin' spider. 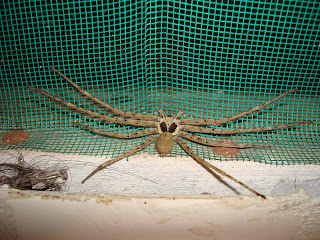 Now while Courtney is usually pretty excited to see the creepy crawlies while we're out and about, for some reason when they're in our room she has a totally different reaction. I can probably say that is the most freaked out I've ever seen her about a bug. Excuse me, arachnid. Granted the dude was about four inches across, had a menacing look about him and was wicked fast! A few dodged swipes of the water bottle later, and he had gone from the window screen in the bathroom to under the bed. This was not comforting Courtney as she was standing on top of the bed making I'm-scared-of-bugs, whining like a little girl, KILL THAT F'N THING sounds. With a distracting roll of the water bottle later and a quick swipe of a size 11 Chaco we heard that oh so distinctive “large bug just died” crunching sound. Problem solved. Can we go to bed now?

We would go for snorkels, wander around the village and relax for most of the day. We did fire up for an afternoon of scuba diving one day which was awesome. We did two dives off of another smaller island, Coral Island, that the dive shop was heading out to for the first time this year. It's still technically monsoon season around here so the seas have a tendency to be a bit rough. Fortunately, the past week or so had been pretty calm so we took the chance and made the half hour trudge out to the island. Totally worth it, minus the over-the-side fish food that a few passengers almost provided due to the rough seas, as both dive sites were great. We saw turtles, tons of big angel fish, eels, some fantastic coral and a very odd looking cuttle fish. We even got up in time on Monday morning to catch the last five minutes or so of the Super Bowl. Can't say there was a whole lot of interest from the locals to see the game, but at least they had satellite TV. Congrats Steelers.

After three nights in ABC we decided to tackle the 11km VERTICAL trek over to the only village on the east side of the island, Juara. Now from what we'd read, there is only a walking trail over to Juara. The ferry doesn't make it around to that side of the island and there are no roads that go over the island so the the only way to get there is by foot. We ditched one of the backpacks in ABC to lighten the load and made our way to Tekek, a village to the south of ABC, where the trail starts. I guess I use the word “trail” loosely at this point, but I want to be sure people aren't confused. This is not the Lief Ericson Trail in Forest Park or any other nicely cleared away, gravelled, bark dusted or paved trail you may be used to at your local green space. This is more of an overgrown, up the side of a mountain, watch where you step so you don't slip and die, ringing sweat from your shirt type “trail”. 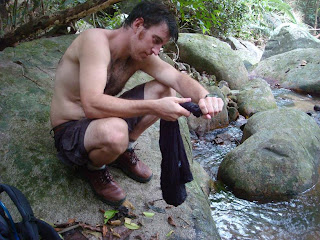 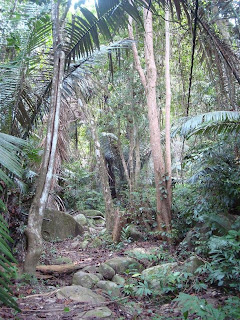 We're pretty sure we saw Locke and Jack hunting a wild boar on the way, but fortunately no ominous black smokey thing, polar bears or Others. It took us a bit over three hours and we were pretty much down for the count by the time we made it to Juara.
Posted by Courtney and Jeremy at 3:30 AM