This place is simply too spectacular for me to pass up the opportunity to ring in with my two cents as well. Somehow I ended up as the Malaysian tour specialist, and did all of the research and planning for this leg of the journey. Jeremy is definitely enjoying the surprises in store so far! I completely changed the original plan from spending time on the west cost of Malaysia after additional research regarding the weather this time of year, as well as hearing tips from several travellers. I opted for the east coast instead, and we've found ourselves in utter paradise on Pulau Tioman; specifically, the tiny village of Juara on the east coast of the small island.

After alighting (our new fav word from the Singaporian train system) the fast boat ferry in Air Batang (which I miraculously survived....Dramamine kicks the ASS of my herbal ginger pills), I was immediately struck by the beachy rustic-ness of the place. And I knew we'd made a good choice in starting here. Air Batang was really great: very chill, very welcoming, awesome diving, great food, fun people....but honestly, it can't hold a candle to Juara. That jungle hike sweat-fest was WELL worth it! 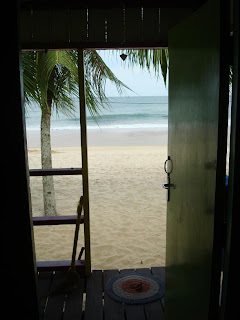 Though I was really pushing to do the hike over to Juara, Jer, on the other hand, needed a little convincing. He was worried that it would be too hard on my knee, yada yada, but also admitted he was afraid he would get bored. WHAT?!? Crazy man! It's no secret that I enjoy island living a little more than him, but BORED?!? I absolutely love finding ourselves in some little remote spot like this where there isn't actually a whole lot to do. Especially after just coming from a big city like Singapore, where it's go, go, go non-stop. That way I don't feel guilty that we're missing out on sightseeing if I'd rather be lazing on the beach, reading, playing cards, working on my tan..... Funnily enough, he was the one really pushing to extend our time here! Our neighbors, a cool couple from Austin, TX and literally the first Americans we've met since the whopping FOUR total we ran into in NZ -- Oh, besides the dive instructor in Air Batang who was from Eugene, OR, of all places! He was rubbing in the fact that his mom just sent him a care package with Tillamook cheddar in it -- Anyway, the couple next door told us they ran into a Swedish guy in the next bay who came here for 3 days with his girlfriend and now they've been here for 6 weeks. We can definitely see how that could happen!

Jer mentioned in his blog that we keep joking about running into Kate and Sawyer, etc., but this place is seriously like the island from Lost. The beaches jut straight up to a jungle wonderland, full of sights and noises that constantly keep you on your toes. I keep looking around and I can't really believe this place exists. 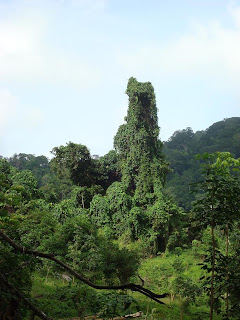 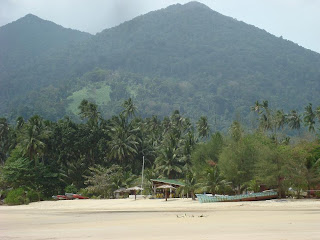 For the four days we've been here now, a new crop of people manage the hike every other day or so, while travellers here bid a sad farewell to this side of the island and head back to catch the ferry onward. Still, at any one time there has never been more than a total of 7 travellers – yes SEVEN whole people with whom to share this treasure. And they are all cool and interesting, and full of awesome stories and tips for our future locales, so we don't mind. ;) We literally have paradise to ourselves! 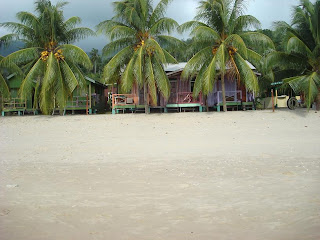 Posted by Courtney and Jeremy at 3:35 AM

Wow! It does sound like a paradise! The pictures are absolutely unbelievable! Makes me want to go there right now...