The Foodie Rings In

Since arriving in the SE Asian corner of the world, the foodie in me has been on cloud nine. Bali was full of culinary delights and however painful it proved at times, we sure did enjoy each and every tasting of the local fare. Such full flavor, unusual pairings, and plenty of unidentifiable yet delicious treats came our way, Balinese style.

So I expected the ride to continue in Singapore, as I remembered reading/hearing/seeing? that Singaporean fare is supposed to be awesome. Right? We arrived just in time for the Chinese New Year festivities to commence, and headed to the waterfront area to see what was happening. Amid the giant lit displays, floating sidewalks, and huge firecracker show, glowed a sprawling food market positively swarming with people. Let's eat! We perused the countless stalls before making our respective choices. Jer went for a grilled eel and chicken combo, with rice and kimchee (I fell in love with that spicy treat when Tammy introduced us to Korean BBQ in Chicago). It was quite tasty. But I had honed in on my choice: whatever this was, this completely alien bowl of goo that everyone was going absolutely apeshit over, that was what I was choosing! The line for this particular stall was at least ten times longer than any other, and people were literally pushing and shoving to get a spot. I couldn't wait to try whatever this was that had everyone so worked up! It turned out to be what they refer to as grass jelly, a blackish-purplish jello type substance, that comes out hot and in the form of cubes. They then dump a cupful of shaved ice on it, and you have your choice of 3 (or all) toppings. I of course went for the gusto and ordered the full meal deal. Of the three toppings, only one was recognizable: lychee fruit which they called logan. Topping number two, called sea coconut, looked like two inch long brown gummy worms, and resembled coconut in look, flavor, or texture in absolutely no way at all. The third topping also had me baffled as they were translucent, whitish, cloudy oval ball things about the size and shape of a large olive. No discernible flavor for either alien topping, just a sugary sweetness. The grass jelly was slimy and soft, and definitely weird because it was hot and really didn't seem like something that should be. The ice promptly melted down to form a broth, if you will, for this odd dessert soup I now held. The two unknown toppings were incredibly chewy, kinda gummy, kinda slimy all at the same time. The overall flavor of the concoction wasn't even describable – just very, very sweet and STRANGE. I wouldn't say it was BAD, necessarily, though the look on Jer's face after trying one measly bite told me he would say differently. Hmmm. I tried to power through but in the end didn't finish the thing. In the voice of the adorable little girl who sat next to me at the Jordan/Singapore soccer final: “SINKA-POH!! SINKA-POH!! 0 and 1 so far. 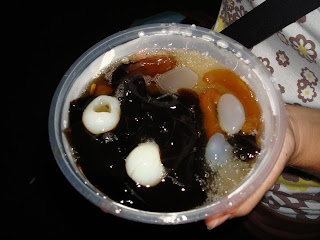 The hostel we stayed at was great: clean, comfortable, air conditioned, with a huge flat screen and tons of movie choices, and free wifi that worked about 15% of the time. It also included free breakfast....coffee, tea, toast, and cornflakes. But no milk. Dry cornflakes, yummm. Our second meal out on the town came from a packed open-air restaurant. Always a good sign. We ordered the wonton soup and chicken/veggie/noodle plate to share. The wonton soup was quite good, especially with a good dose of spicy sambal mixed in. No amount of sambal could save the noodles, however. It was virtually tasteless and swimming in grease, with ultra scary chunks of chicken parts that make me consider vegetarianism, and a few odd pieces of bok choy. SINKA-POH: 1-2. Hanging in.

The culmination of our culinary experience: the soccer game. After a day touring the charms of the tourist trap they call Sentosa, we were strapped for time and weren't able to grab dinner before the game. It's a huge stadium, where a national team plays; so we put our bets out that they would definitely sell food there.....and yes, they did. Outside the arena, several vendors stood hawking food: Jer chose a “beef burger” which was a bun-ish type bread roll with a BRIGHT RED patty of “meat” on it, and nothing else. I hesitantly tried a bite and dear God, it resembled a salty, grisly piece of tire tread. No thanks. I opted for the only other (but more authentic) choices: an oversized spring roll and another deep fried something, shaped like a triangle. It turned out to be filled with diced potatoes?? taro?? turnips? (I really have NO idea) that were flavored with some sort of sweet, kind of curry-ish, maybe almost cinnamon-y spices. When I type that out it actually sounds good. It wasn't. Both were deep fried to all hell and the spring roll tasted only of grease. It's amazing what you'll force down when the only alternative is a red tire burger. So, nearing the end of the game, and both still hungry, we noticed a few vendors from inside the stadium working their way into the crowd to hawk the rest of their bites. One guy was toting these skewers with 3 white, perfectly round balls on each, selling them for fifty cents. That's about thirty cents to us, and anything is worth trying for thirty cents! People were going nuts for them, buying 5 at a time and crawling over each other to get to the guy. They looked good too! Like little marshmallowy puffs or little pastry bites. A sweet confection of some sort. Whatever he called them didn't give us any clue to their composition, but the surprise on his face when I asked for one should have been my first clue. One sniff and I knew my dessert dreams were dashed. They smelled salty and faintly of the sea. Let me try to describe the experience. Let's say you were to pop your eyeball out and hold it between your thumb and forefinger. Or better yet, you find someone else's eyeball on the street so that your eyesight is still intact. If you gently squeezed it, you'd imagine it to have a somewhat firm, while still kind of rubbery give to it, no? That it would 'bounce back' to its original form in your fingers, right? Yeah, these were just like that. Now, I've never had the culinary pleasure of eating a human eyeball, but I imagine it to be just like these treats as well. I took a bite and the fleshy, gelatinous texture sort of swam around my mouth as I tried to chew it. Rubbery, chewy, scary. Not good. I said, “I think it's fish. I think I've seen these things in pictures on menus. In soups and stuff.” Jer tried a tentative bite and disagreed vehemently, “No way. There is NO WAY that thing is made of meat! Of ANY kind!” He was repulsed. I had to admit he had a point. It tasted vaguely of fishiness, and the texture soooort of resembled fish meat, but how in the world would they come in these exactly circular orbs? (aka, do I know of any fish that are very small and perfectly round??) 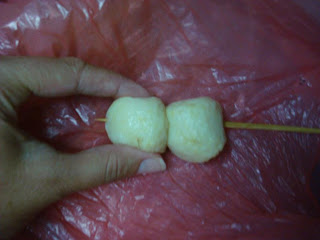 Yep, they were “fish balls.” The owner of the hostel had a huge package of them defrosting on a plate when we arrived home. Ingredients: fish, starch, sugar. Yum! When she cooked them up it filled the whole place with a smell distinctly akin to.....dog food. Though Sinka-poh won the soccer game, they were officially 1 and 6 now. Things had gone quickly downhill.

We tended to eat breakfast and then not eat again until dinner time. With the exception of the surprisingly decent Indian lunch at the zoo, and Jer breaking down for a burger one afternoon, (which he would like me to include was possibly the tastiest food option of all!) we really only ate out a handful of times. We bought groceries and fresh fruit that we would snack on in place of a real meal, and enjoyed a yummy vegetarian North Indian dinner in the Little India part of Singapore on our last night. Indian food has been consistently good everywhere we've tried it, which is awesome because we LOVE Indian food, and the menu choices seem limitless. But does Indian food count toward our Singaporean food experience anymore than Burger King? 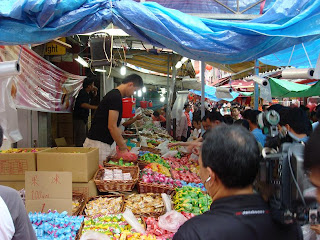 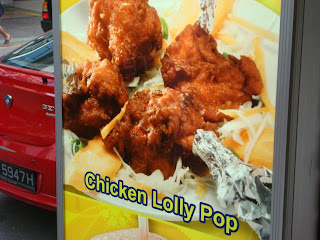 Posted by Courtney and Jeremy at 4:49 AM

Maybe it is being pregnant, but this blog made me gag the whole way through. You guys are brave to try these things. Thanks for the pics, it add to the gagging too. Even though I may not comment all the time, I love the blog and keep up on it regularly. Happy Travels!