I think we got our fill of the big city. Singapore was nice, but that's just about it. Nice. Everything was pretty much on the average level of “fine”. The airport was wonderfully modern and clean and customs a breeze to get through. There are super efficient and relatively inexpensive train and bus systems to whisk you all over the island. There seems to be endless amounts of malls, markets and side street garage sales in which to purchase everything from the latest Gucci fashions to the cheapest knock-off t-shirts to the most retro of Fat Boys greatest hits tapes. It would appear that if you want it in this city, you can get it.

We very much enjoyed just wandering the city and taking in the sites. We were fortunate enough to arrive just before the Chinese New Year so we were able to take in the festivities for that celebration as well. On top of the giant floating stage bedecked with a mass of glowing lanterns, Chinese zodiac animals (it's the year of the Ox by the way) and Cirque du Soleil-esque performances, you couldn't seem to get more than a block down the road without your eardrums being assaulted by the cymbal and drum bands doing their thing accompanied by the requisite dancing dragon. We were both really glad we made it here for the New Year's celebrations – a totally unique experience!

We also made our way up to the zoo which was quite a trip. They have an “open range” type theme going on with most of the animals which makes it quite intriguing. Obviously the lions, tigers, bears and the like are in their designated enclosures, but they have a giant (apparently the worlds largest) free ranging orangutang display. It's basically a large forest area with ropes strung between the trees and dozens of orangutang just swinging about, going wherever they want to go. It was quite amazing to see. They also had such an amazing variety of tropical animals, so many kinds of primates and really great up close exhibits of most all of the animals. Highlight of the day was of course Courtney being chosen to participate in the Splish Splash aquatic show. She got to show off her frisbee “skills” by tossing one to Carlos, the very large Californian sea lion. And the reward for her efforts – a friendly smooch from the man himself. 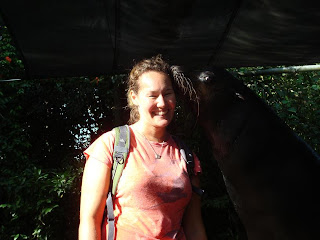 We made it down to a small island off the main island, called Sentosa. It's basically a little resort island with lots of man made beaches and other touristy type stuff to do. Give it a few more years and they'll be cutting the ribbon on their first casino and amusement park as well. They were having a really cool floral festival for the new year that was very nice to wander through. Our last night got us to an exciting soccer match between Singapore and Jordan, a qualifying match for the Asia Cup. It was a pleasant change to have stadium refreshments be no more than a dollar or so, even if they did consist of unidentifiable fried goods and marshmellowy looking skewered fish balls. It's all part of the experience, Rus.

Other than that we just milled about the city and soaked in the concrete and high rise goodness. Fortunately it only took a four hour bus ride with a quick border crossing, a two hour boat ride and a short walk up the main island village drag (ie: sandy walkway) to get us to our new island home on Pulau Tioman, a small island off the east coast of peninsular Malaysia. This is much more our speed. We're shacked up in a little hut, about 75 feet off the beach, with a bed, a cold shower and toilet that you bucket water down to flush. Perfect. We just had an amazing day of scuba diving off of Coral Island, but we're both kind of beat so I think we'll just relax tomorrow. I dig this island lifestyle. 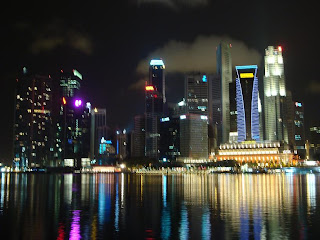 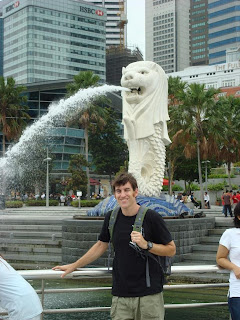 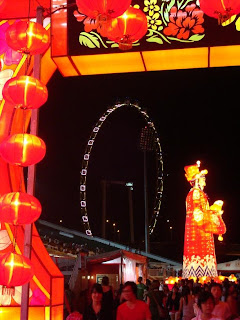 Posted by Courtney and Jeremy at 5:01 AM

Really? You warn strongly enough to warrant a title of the blog entry? Don't forget that part of the appeal is easy access to the very cool places in the area. To be honest though, the beer prices are enough to make my knees tremble.