Glorious! (But never to happen again...)

In all my days of board gaming I have never laid witness to the thorough thrashing that was delivered that lonely night in Haast. It started out with an innocent game of Battle Ship at our hostel. Everyone had fun and nobody got hurt. We then moved on to Monopoly and that's where things got ugly. Courtney and Jeremy both came out aggressively, snatching up properties as fast as they could. Players passed Go, rents were paid, people went to jail and Jeremy even won $10 in a beauty contest. Naturally. But as the game progressed the moods began to turn.

Jeremy was coming on like the Donald and putting houses and hotels on all the properties he could. A few rolls of snake eyes here and a few Free Parkings there and the bankroll was flush with cash. Courtney's luck, on the other hand, was taking a turn for the worse. More rents due, more poor taxes to pay and more properties she had to mortgage. By the end of the night it was mayhem. It was, in fact, the truest game of Monopoly ever played. Behold.

Jeremy owns all properties. There is a hotel on every property. Courtney has no money. Jeremy has lots and a Get Out of Jail Free card. Never would I think that an ass whooping of this magnitude could be delivered at this game. Little did we know that Courtney would do it to Jeremy only a few days later (perhaps this is the ultimate fate in a two player setup?). BUT, as this is the game of which there is photographic evidence, it gets the glory. Jeremy = Monopoly King!!! 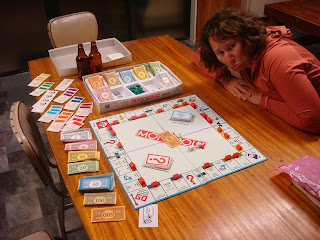 Posted by Courtney and Jeremy at 4:12 PM

Hi guys! Just wanted to say that we miss you at Meredith/Buddress Thanksgiving this year! Love seeing the photos and hearing the stories though. Miss you both....The Meredith Fam

Cookster just gave me this insite into your whereabouts. You're not missing anything here! Enjoy your travels. Will stay in touch and fallow along. Jim Weitman

Hey guys! Great stories that made me laugh!
I must confess... I once was playing Monopoly with Cal and Nate and everybody was having great time until I started losing... Cal and Nate made it even worse. They actually made me cry! How pathetic is that?
Miss you!


Thanks a lot for sharing this with all of us you really recognise what you're speaking about! Bookmarked. Please also talk over with my website =). We could have a link exchange contract between us aol.com email sign in