I need a BLOG fix, Part I

Ok, November 22 was a long time ago – I’m sure you’ve had a few more adventures that you could share. Even the board game review proved to be interesting reading. I want to read about Roo’s & Wallaby’s – all the big spiders you’ve managed to avoid – stinging jellyfish – snakes that can outrun a man – You know all the good OZ stuff! Your loyal fans deserve better –
Grumpy in Reno!

Please accept our sincerest apologies. You are right – it has been nearly a month since our last entry and our readers do deserve more. Our neglect has not been intentional, however; please know that. It's just that we've been filling our days with non-stop, action-packed excitement and haven't had a moment to document it for our fans. Let me attempt to appease you now:

We've thus far tried to blog in chronological order, though our readers would never have any clue as to our actual whereabouts were we to attempt this at this time, since we are so far behind. So I'll do a sum-up to bring everyone up to speed and hope for the best in terms of getting older adventures documented at a later date.

We left the wonders of New Zealand behind at the end of November, to fly into Sydney just in time to meet up with Tammy and Rob (Courtney's friend from high school and her man, who we hadn't previously met. He was cool and very go-with-the-flow, which made for a great traveling companion as well as getting a thumbs up) who we planned to celebrate Thanksgiving with and travel around with for about a week and a half. 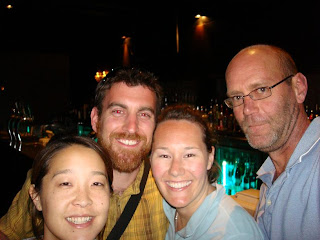 We had a fantastic time together! We hired the Red Rocket 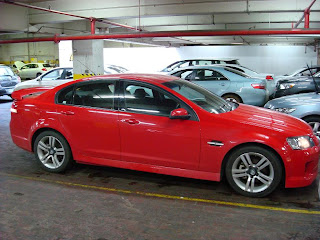 to travel in style down the coast after spending a few days in Sydney. Some of the highlights: a very authentic Thanksgiving dinner of Italian food, a hilarious comedy show at the Sydney Opera House (two twin guys who called themselves The Umbilical Brothers – check them out if they come to a venue near you!), 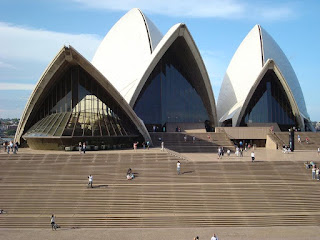 traveling down the gorgeous coastline from one sleepy coastal town to the next (sleepy meaning “ENTIRE town shuts down at 6pm and your only meal option is very sketchy Chinese food”), 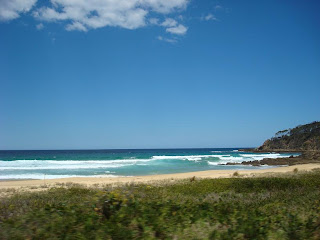 seeing and petting kangaroos in the wild at Pebbly Beach, making a killer American meal of chili dogs and macaroni and cheese for dinner, and meeting the son of the mother dog who played the main canine role in Babe (seriously – his owner was very excited about this).

To be continued in tomorrow's edition...
Posted by Courtney and Jeremy at 9:24 PM