So we've become accustomed to staying in the wonderfully outfitted holiday parks, the tip-top of which are the Top Ten Holiday Parks. Stainless steel, multiple burners, manicured grasses and eau-de-bleach galore. When we decide to rough it though (i.e. camp like we usually camp, out in the middle of nowhere) there are a wonderful network of DOC (Department of Conservation) camp sites that are very basic, typically off the beaten track and not too populated. We hit our first DOC site just out of Whangamata on the Coromandel Peninsula late one night with only enough time to fire up a few servings of Ramen noodles (ghetto style bought at the Asian grocery in Auckland, a great idea at the time but quickly found to be a far cry from the college staple REAL Ramen noodles).

The next morning we made our way up to Wentworth Falls, a nice hour-and-a-half-or-so hike shooting off right from our campground. We had the privilege of being escorted by our personal tour guide, Missy? Lucy?, (the camp host had a VERY thick accent) the campground dog. 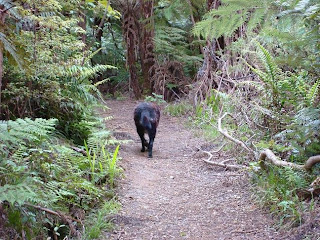 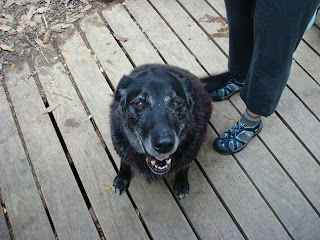 She was a very good guide and was happy to let us know when we were lagging behind or not going the right direction. Apparently at one point the “right” direction according to MissyLucy to cross the river was THROUGH the river and not over the beautifully crafted wooden bridge going OVER the river, which we didn't see until after the fact. Courtney, not being one to ever miss out on the full experience, decided to really introduce herself to the river. 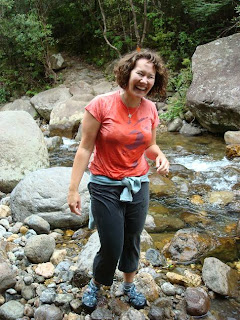 I think she dried off by the end of the hike. Nothing a nice coffee and meat pie wouldn't cure. More on meat pies later... 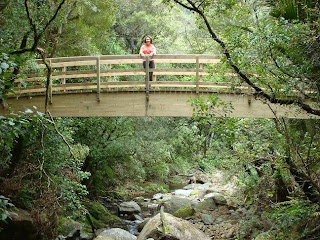 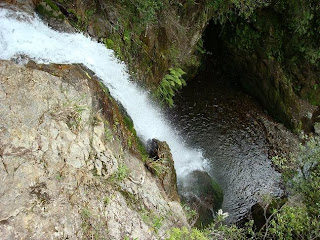 Posted by Courtney and Jeremy at 3:31 AM

mmmm meat pies... I love the pictures and the updates! It looks wonderful! But, Folgers would like you to return ASAP.

I didn't tell you two that I had the ability to change life forms with the snap of my fingers??? That was me guiding you down the path. Glad we could meet up again! :)

Keep up the great posts. Fun to live vicariously through you two. Enjoy every minute!

Hey you two! Looks like you are having a wonderful time. It is absolutely beautiful there. I hope you continue to have an amazing and fun trip. Look forward to reading more!!