Well we have now officially reached badass status! In Waitomo we did a tour of one of the many caves that the area is famous for. It started with a 90ft abseil (apparently Americans are the only ones who call it rappelling) down into the belly of the cave. Jer had never done it before and my only experience was rappelling off the Ormsby House Casino's parking garage in high school (Mom & Dad – I've told you about that, right???). We'd lucked out that no one else had signed up for the 9am timeslot with us, so we had Allen the hilarious Scottish guy as our personal tour guide.

After landing in the cave we hiked upstream a bit to check out the glowworms – also unique to the area. Though they seem really cool, glow worms are actually the very gross larval form of the fungus gnat. The gnats lay their eggs on the cave ceilings, and once the larvae hatch, they create a slimy sock like cocoon that they live in for 9 months. In order to catch food, they excrete long sticky threads that hang down from their cocoon to catch flying insects, who are attracted to the glow they give off. The glow actually comes from their waste that stays stored in the tip of their body. Gross, right?! But did you enjoy your glow worm lesson for the day? Ugly in the light but really cool in the dark....the cave ceiling is alive with a million tiny blue lights that look like stars. Allen slammed his intertube against the cave wall (scaring the absolute shit out of us since it was pitch black and we had no warning) and it made them 'wake up' and glow brightly.

We hiked back downstream where we mounted our tubes and blackwater rafted downstream. It's called blackwater rafting because you can't see a thing and it's pretty exciting! The water levels were low so we could only go so far before we were hitting rocks and had to dismount. Of course, true to my klutz-o ways, I managed to slam into a rock and get dumped into the water. Even when I can't see I still manage to go ass over teakettle one way or another.

Since it was just the two of us, it allowed extra time to do some caving and exploring. What a thrill! Allen turned and looked at us with this sly grin and asked “How do you two feel about small spaces?” When we both gave a half-hearted mumble and a shrug, he proceeded to lead us through a series of itty bitty crawl spaces, up nearly vertical cliffs, down natural water slides, under crevices that we had to duck and swim into, up onto ledges, etc etc etc. Wow! We were exhausted and exhilarated all at the same time.

Eventually the tour came to an end, so we high-kneed it back upstream to the cave entrance, where we climbed the rock face to get out. No small task when you've been caving for 5 hours, but definitely an amazing exit to our memorable day. Don't we look sexy in wet-suits??? 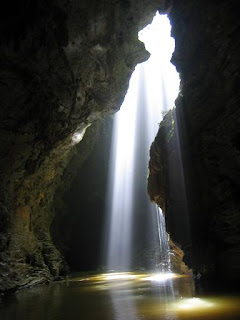 Posted by Courtney and Jeremy at 3:47 PM

as a matter of fact you do look sexy in wetsuits. but maybe thats just me missing you enough and remembering what you both had on the last time I laid eyes on you.
you guys are BADASS!