You're Going to Sleep Where?!?!

Actually, sleeping in the van has so far been really good. I can't say that the dining area that folds down to a bed with too thin of cushions is on par with the dreamy queen size Sealy Posturpedic at home, but it works. Usually a bit better for Jer than Courtney. She woke up this morning claiming that she had just slept on rocks. So ya, it's a little hard sometimes.

But as far as where we've stayed, it's all over the board. I guess part of the brilliance of the van is that we can pull over pretty much wherever we want and have a meal or a snooze. We've utilized the fully outfitted rest areas many times - no power, but we have the gas and 12 volt to cook and see by. Sometimes it's the oversized vehicle parking lot in whatever town we're in. 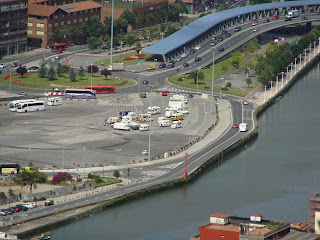 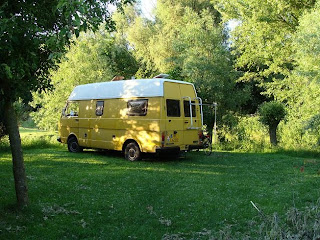 We've also had some wonderful free-camps along the side of random roads. Sometimes it takes a while of driving through the neighborhoods to find an acceptable spot to pull over, but sometimes it's very rewarding too. This spot was up in the very north of Holland in a town called Harlingen. We were able to park for free right alongside one of the canals, and since it was a place where boats often moor up there was power for us too. Brilliant! 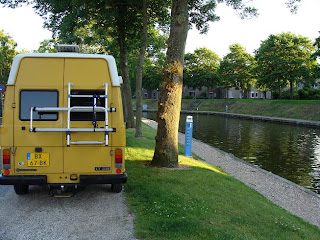 The campsites we've become accustomed to are a far cry from where we go for camping at home. Usually when we head out into the Pacific Northwest we're taking to the deepest, unmarked forest roads to find the off-the-beaten-track plot of cleared land to drop the tent and get away from anyone and anything. Over here we're looking for something that's a bit more akin to a KOA at home. (Damn you KOA...) With being on the road the actual way of life, we like the amenities. Showers – good. Showers with hot water – good. Free showers with hot water – GOOD! Wi-fi – hit and miss whether we get it or not, but good. Toilet paper in the stalls and soap by the sinks – good. Toilet dump stations, recycling stations, water fill up stations and all of those other facilities to take care of your caravaning needs – good. A big enough plot that gets you far enough away from the neighbor kids so that their screaming doesn't bother you as you try and sleep in – priceless. Even more priceless if the people next to you don't chain smoke and stankify the entire area.

Most of the campsites are pretty clean and give you a sectioned off plot that will be yours for the next 12-72 hours. These are usually pretty standard, but some sites that we've come upon have been downright beautiful. This one, in particular, was in Llanes, Spain along the norther coast. It was a beautifully terraced hillside right on the water and our spot looked over pretty much all of it, with the crashing waves of the Atlantic right out our back bedroom/dining room window. Loved it. 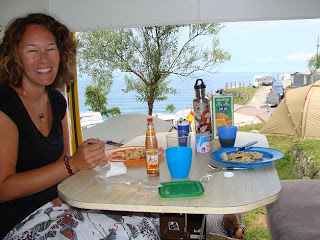 I gotta say, once we get home I won't be sorry to get back to camping in the middle of nowhere, in the woods, in a tent, un-showered, with a cooler of beer, hot dogs and s'mores. Mmmmm... s'mores... But I can say with a good deal of confidence, when we get to that RV'ing age in our later years, a trip down the I-5 to the Marathon factory and showroom will definitely be on the books.
Posted by Courtney and Jeremy at 2:26 PM