After that we found out Tanan and Michael were going to be in Paris within a week or two. Tanan and I became friends through work and her and Michael are Sasha's newly adopted and probably much more loved parents. They spoil her effing ROTTEN so we're going to have a monster on our hands when we get her back! I'm not kidding here....she has since upgraded from her cat bed on the armchair beside our bed, where we thought she was quite happy, to sleeping IN their bed, BETWEEN them, UNDER the covers, with her head on the PILLOW!! Needless to say, she gets away with everything she didn't with us. It's like a year straight at Grandma's house. Boy, she's gonna be a treat once she comes home to what will seem like prison. Thanks guys!! :) Anyway, I digress. They had missed their flight for their originally planned trip to Paris by writing the wrong day on their calendar! How devastating. Anyway, Tanan's birthday wish was to go to Disneyland Paris so we bombed to France and met them there....it was pretty funny. We crashed in the bunk beds in their room at the Hotel Cheyenne.....this place was hilarious!! Every bit of it was themed out to the max: bandanna print curtains, cowboy boot beside lamps, the mirror was framed like a huge rope and lasso, etc etc. It was hilarious but very comfortable with an awesome breakfast buffet. Disney Paris was pretty much the same as LA Disney but smaller scale. The highlight was being dared to eat the entire tub of cotton candy in one chubby bunny stuffing while laughing my ass off (I almost choked because I couldn't produce any saliva to get the crap to melt and dissipate in my mouth), then Tanan and I assing out and taking pictures with every Disney character we could find. We were practically shoving kids out of the way, jumping in pictures, getting reprimanded for hopping the barriers....it was hilarious. I blamed the behavior on an insane sugar rush, but Tanan is just Disney crazy! 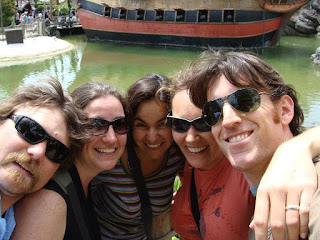 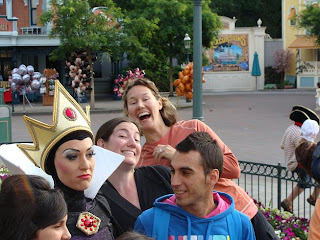 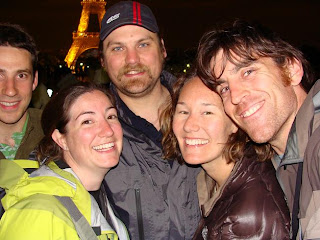 So we spent 5 days with them, crashing at their friends Frenchy and Maria's tiny apt in Paris, and then hit the road to make our way back to Holland. We drove through Roune, a cute little town in Normandy, and then through Brugge. Brugge was one of my ultimate favorite spots on my first European tour. It was a little medieval-feeling cobbled town full of charm at every turn. Canals, foot bridges, beautiful stone buildings with funny chocolate shops, (the chocolate boobs are pretty funny, come on!) and great plazas for stopping to have a drink and watch it all. It was relatively unheard of, aka “new on the scene” at that time (which was 8 years ago now). I couldn't wait to go back there and Jer was really stoked to see it too. Well, apparently the secret is out. This was the first time that my memory of a place was in juxtaposition with the 'new' reality of it. What a huge bummer! Brugge was still that charming city I described, but now overrun with tourists, absolutely crawling with people from charming stone wall to charming stone wall. We discovered near the very beginning of the trip that we don't enjoy the big cities near as much as the quieter, slower paced towns and I think the main reason is that there are so many less people, it's easier to actually see and enjoy the place.

We were thrilled to get back to Holland. Man, we really love that country. Is it a coincidence that our absolute favorite places look an awful lot like home in the good old Pacific Northwest? New Zealand and Holland are both verdant places, full of trees and farmland, hiking and biking trails, with a nice balance of sun and rain. Living everyday life makes you feel like you're still a close neighbor to nature. Qualities I look for in an ideal destination, I've discovered.

Our plan was to head to a weird theater festival in the very north on a tiny island called Terschelling. Apparently it started because people would just go out on the street corners and dress up in costumes, or put on impromptu skits or weird performances and stuff, so they created an entire festival around it. We met another guy in a different band (but also loved his music) who was playing several gigs there so that was a bonus as well. I was expecting this thing to be a total trip and was reaaaally looking forward to it, but in the end it didn't happen. The main issue is getting a spot on a ferry and we tried so many times but couldn't get the ferry website to work. Calling and emailing only got us automated responses in Dutch. Since the website listed several open timeslots, we decided to bomb up there anyway and take our chances. Turns out we could get TO the island, but every timeslot coming back was booked for weeks out. We had to be in Paris by June 23rd to meet my family, so it was a no go. I hope we can make it there someday in the future. The plus side was that we happened upon darling Harlingen (the town where you catch the ferry) and ended up scoring an amazing canal-side spot to crash. It was just one more delightful Dutch town. 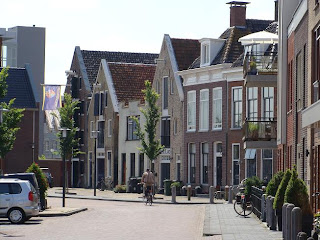 Posted by Courtney and Jeremy at 1:58 PM