When in response to my mom's comment that she often can't tell which one of us is writing a certain blog, Jeremy said “I'll let you in on a little secret. It's always me.” And since it literally has been months since I've put my thoughts to paper/screen, I figure it's time to stop writing blogs in my head and actually write blogs on the blog.

(It turns out that a 5 month silence makes me a tad long-winded. Since Blogger will only allow 4 pictures to be posted on a blog, I broke this post up into several parts so I can include more pics. So....keep reading.)

So we hit a wall in Vietnam. Loved it loved it but then one day we woke up on a bus, covered in bedbugs, and someone had stolen our shoes. It felt like the downnsides of the place had gradually and unknowingly caught up with us all at once and we were over it. So we decided a change of scenery was in order, and after visiting Murphy in China, we forwent (is that a word?) (forgoed?) the original plan of Thailand and Laos and headed straight for Europe. The time with Murph was fantastically just what we needed to refuel....her apartment was very cute and cozy, she had a million pirated movies, really cool friends, and I was able to do some cooking and baking which was awesome. Best of all, we had some serious QT with one of our dearest friends, one who could also relate to the woes of traveling. From there we spent a quick 2 days in Hong Kong, which was a cool city. Kept reminding me of San Fran, of all places. But we were so excited to get the F outta Asia and land in chilly London. Wow, I had a whole new love for that city! We covered every square inch of the place and ate amazing food....I think I could totally live there. I don't remember being dazzled quite that much the first time around.

After that we headed to Holland, to a little town called Utrecht. We totally fell in love with the place. It's a small university town with a hoppin' restaurant and bar scene, and full of cute canals. The cobbled streets were great to stroll around and people watch. 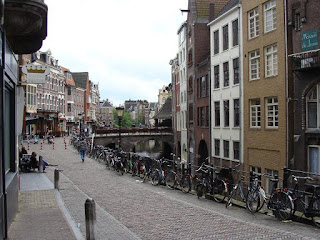 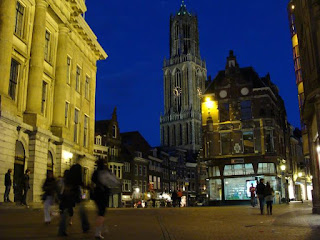 We also found the most amazing doner kebap place that we went back to at least 5 times. Back when I travelled through Europe with Bolton, kebap stands were everywhere, crazy cheap, and insanely tasty. There were days that we literally ate them for breakfast, lunch and dinner. Well they're no longer found at little street carts, but in actual shops now. But every town is still chock full of them and they're still awesome! 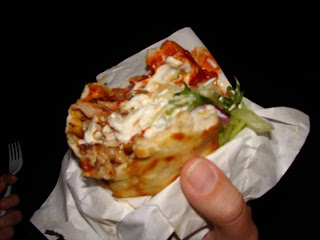 Utrecht is where we bought Floyd, an old 1987 mustard yellow VW campervan, our home for the remainder of the trip (more to come on him later). We spent about a month touring around Holland and we absolutely loved every inch of the place. We started with a quick trip to Den Haag. While in Utrecht, we made friends with Jesse and Kristine, some locals (he is originally from CA and married a Dutch woman 20 yrs his senior). They were a lot of fun. She plays in a salsa band....in Holland, hilarious! We went to a concert of hers – the reason for the trip to Den Haag -- and it was great music and totally fun. I got coerced to the dance floor by this old Argentinian dude named Carlos who was hilarious. I totally hammed it up and he was in love! He told us later that we need to look into going to some nudist camps (when the weather warms up, of course!). He said he'd just gotten back from one 3 days ago and that was why he was “so enthusiastic!!” He was a freakin riot. But we're actually intrigued by the idea and are totally going to look into it!! Ha ha. We like being naked, so why not! Though he said it's mostly old people so the scenery may be a little wrinkly for our taste. I'll definitely report back after that one. 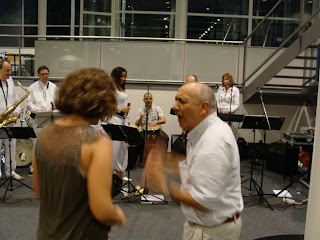 Posted by Courtney and Jeremy at 2:07 PM