As many of you know, though I still feel like a kid at heart, I am an old lady in body. Surgeries on both feet by the age of 30, and a thriving collection of Dansko clogs under my belt, I've effectively given up on the idea of wearing heels, or for that matter, cute shoes in general, ever again. (Though the good-for-you shoe companies are coming around with more attractive styles all the time.)

Much to Jer's chagrin, the hunt for comfortable and functional shoes on this trip has been as bad if not worse than at home. All pairs I started with have long since been replaced, and many of those recycled now too. Until, WAALAAAA, the clouds parted and the heavens shown down on the size 8W men's Chaco sandals in an outdoor store in Brisbane, Australia. Jer had been wearing his Chaco's since the summer before we left, but when I tried them they were unbearably uncomfortable. For some reason this pair was different, maybe because they were men's? Not sure, but I slipped into those babies and pretty much never took them off. No need for my old lady arch supports, good for walking, hiking, biking, whatever. These were the shoes to change my world.

UNTIL, some j-hole on a bus from Hue to Hanoi in Vietnam decided these shoes would change his world instead. So the search began again, first with a pair of Fauko's (what we called the fake Chaco's sold everywhere in Hanoi) that were not the same and crapped out very quickly. Then we hit up the Nike store in Guangzhou, China and I settled on a pair of running shoes. My podiatrist discourages my wearing of Nike's but says she understands since we get the 50% family discount (thanks Lis!). She warned me that they'll only last for 2 to 3 months at the most with regular wear, which is true at home. I can feel when a pair of shoes is going out and once they die, boy are they dead. (Also to Jer's chagrin, and now I have back-up from the doctor that I need to keep shoe shopping!)

So with the amount of walking we do these days, my new Nikes lasted me a solid 3 weeks. 3 weeks! The dreaded search was on AGAIN and shoe shopping had officially lost its appeal. I just wanted to find a comfortable, functional, and cute (if possible, but unlikely) pair to last me for a tad longer than 3 weeks! The search finally culminated CULMINATED in Amsterdam, after 8 or 9 other stops, at the Skecher's store, of all places. But if I remember back, after my entire backpack was stolen during my first European trip with Bolton, I replaced the lost shoes with an ugly, clunky, but very comfortable pair of Skecher's too....and they lasted quite well....hmmm. Anyway, I zoned in on the UGLIEST, DORKIEST, most horrific pair of shoes I think I've ever seen in my life. A “new technology” shoe they have coined Shape-Ups. It looks rather like a normal tennis shoe but with an inch of extra squishy foam under the sole. The technology is supposed to mimic walking barefoot and the natural roll of taking a step without shoes on at all. At the same time, it promises to tone your legs and butt, relieve back, knee, and joint pain (which had returned in full force to this old lady, hence the desperate search), and improve your posture. They did it! Invented a miracle shoe! Maybe my search was over for good. I could be the new Shape-Ups spokesmodel and own a dorky pair in every possible color!

But could I do it? I do have some fashion scruples left, and these things were just a completely embarrassing 6 inch tall eyesore. And I'd be wearing TWO of them. I hemmed and hawed, and we continued the search to see if a slightly more attractive pair of workable shoes existed anywhere. In the end I sucked it up and bought my new Rollers (as Jer calls them). It was immediate relief physically, but mentally it took a whole new gearing up. Everywhere we walked, I could feel people staring at my hilarious new shoes....and I'm not making that up. It wasn't just paranoia, they are head-turners! See for yourself. 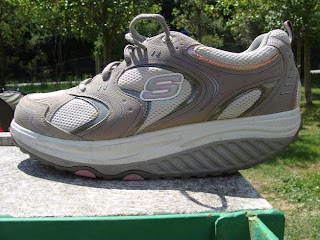 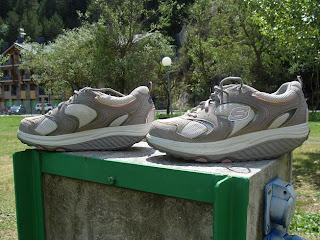 I'm over the embarrassment for the most part now and wear them with what little pride I have left. I can't say my buns are now perfectly sculpted and rock hard, but they really do give you a bit of a workout when you walk. Because of the squishy sole, you're constantly trying to stabilize yourself, which engages muscles that you end up feeling a bit at the end of the day. And let me say that squatting over a nasty toilet you don't dare sit on is no small feat in these things either.....trying to squat and stabilize, while rockin' and rollin' back and forth, aiming correctly at the same time....it takes skill and practice! They have definitely taken some getting used to though....staircases especially presented a daunting challenge for this clutso at first; either direction I had to hold onto Jer for support. Even now that I'm used to them I still often “peel out” with a nice loud tire screech sound, and usually always just walking along even ground. Just one more way these babies turn heads.

Go out and get yourself a pair – all the cool kids are wearing them! 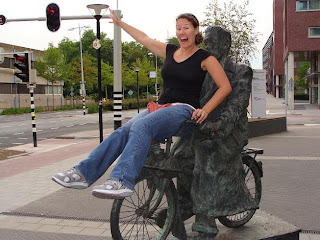 Posted by Courtney and Jeremy at 8:00 AM

Skechers version of MBT's!! They are ridiculously expensive, and the same kind of shoe--with many different styles. You can have some style with those huge soles! Toms