Things to do on the freeway when you're bored

Ya know, I think I remember Firestone getting in a lot of trouble for this kind of thing. You know - you're flying down the highway at 100 kph when all of a sudden there's a lot of loud thumping, the ride gets really shaky, you hear loud prayers from the passenger's seat, swearing from the driver's seat... You pull over and the tread of your right rear tire is beyond shredded, looking like a few M-80s were strategically placed inside. I'm talking blown the F up! That was us the other day as we made our way from Amsterdam to Harlingen in northern Holland.

Fortunately we were just coming to an exit so we were able to pull off to the side of the road with a fair amount of room to change the tire. I donned my safety vest, threw up the caution triangle behind us, Courtney flipped on the hazards and off to work we went. Luckily the last owner was nice enough to leave the jack and lug nut wrenches in the van so we made pretty quick work of things. The hardest part really was getting the spare out of its rack. The bolts holding it under the car were nicely bent to shit (thank you again previous owner) so sans socket wrenches, the Leatherman was put to work. While the wrench aspect of the pliers on the Leatherman worked, I have to say it was not ideal. That took a while.

So with the spare back on (and in a time frame that the dad from A Christmas Story or any Earnhardt Racing team would be proud of, I might add) we made our way a few K up the highway to the closest town. After three different tire shops we finally found one that had the tires we needed in stock and could actually put them on that day. With an added big thanks to the boys at Profile Tire for staying past closing time to put them on. We ended up having to get two new rear tires as the left one was fraying as well and looking like it was ready to blow soon. So a sweet 170 Euro later we were back on the road.

A few more grey hairs, a few less dollars in our pockets, a bit more roadside emergency experience under our belts, a few more prayers to the Big Guy made in our good name and another good adventure to tell about. Let's hope this is the last major breakdown for poor old Floyd. 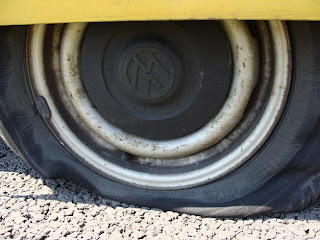 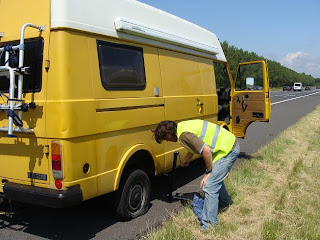 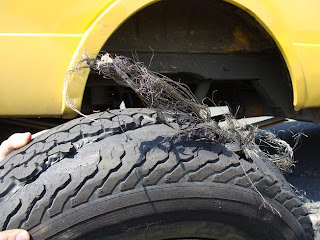 You can almost see all the way through it. 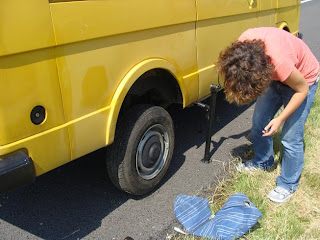 Head mechanic Courtney!
Posted by Courtney and Jeremy at 4:59 AM

so glad you guys are okay...I was in a van once when one of the tires blew (we were screaming along I-15 between Barstow and Vegas) - TERRIFYING. love the pictures though, and seeing what Floyd looks like!!