Driving Around the World - ... and the Ugly

When we got to Vietnam we moved back over to the “correct” side of the road. This unfortunately did not make things easier. The concentration of scooters now on the road increased ten-fold. Giant 8-way roundabouts were now a part of the driving equation (“Look kids. Parliament. Big Ben.”) and traffic laws seemed even less apparent. And going back to the versatility of a scooter – holy crap! You can fit a family of six on a scooter. You can carry a years worth of groceries from Costco on a scooter. You can fit your new flat screen, building supplies, your noodle restaurant, a few bails of sugarcane or your wedding party on a scooter. Those things are amazing. My favorite was a scooter with two giant tractor tires on the back that were so heavy, the front wheel of the scooter was off the ground. Too bad I didn't get a picture of that. And it's not only the “things” that they manage to pile on the scooters, but the people. It's totally normal to see families of four riding on a single bike together. We've seen up to five, and heard many reports of six. Not to mention two adults plus a 20 kg backpack. 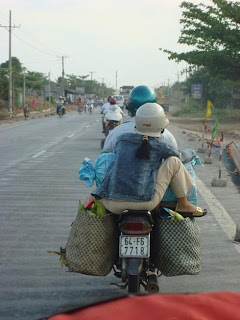 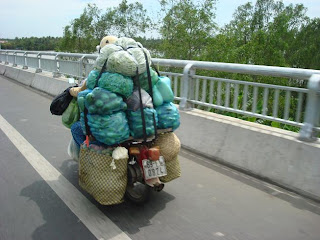 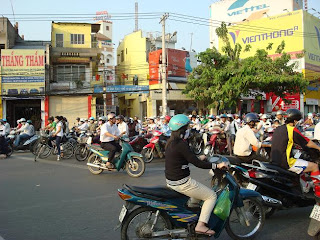 No way were we going to try and drive while we were in Ho Chi Minh. It's just way too crazy. We did hop on the backs of two bikes and do some day tours with a few local guides which was totally awesome! You really have to put your faith in your driver though, because if you start worrying about all of the horn honking, bumper dodging and close calls, you're not going to have an enjoyable trip. In the three days we spent on the back of the motorcycles, I don't think we ever had a really close call. Once we got to the less populated areas of Vietnam we had a go at renting a bike. It was still quite nerve racking at the beginning. You have to learn to totally ignore, while also pay complete attention to every horn honk around you. We've found that drivers in this part of the world have an involuntary reflex of their thumbs that honks the horn, approximately on pace with one's breathing. Not like at home when you have to be close to collision or really pissed to use your horn – oh no. In this part of the world it's used to say “Going straight. Going left. Going right. Speeding up. Slowing down. Sitting here still. Passing. Not passing. Honking. Hello. Here I come.” and whatever else you can think of. It's a condition that you have to experience to get used to. And while maddening at first, and for quite awhile after that, you somehow get used to it. Then again, we've never seemed to get used to the semi coming up behind us and blasting his semi horn. That still freaks us the f out. And only makes Courtney's near-deafness worse so that she hears me even less of the time. Uh-huh.

Other fun facts about driving in Vietnam – the drag race starts from stop lights. I know I mentioned it before, but here it's quite literal. The have separate, smaller sets of traffic lights for the scooters and they have timers that count down the time to the next red or green light. So when you're stopped, you start revving the engine and letting off the break about when the timer gets to three seconds, then play dodge-'em through the crisscrossing traffic that tried to make it through their green-to-red lights as they counted down to zero. Also, there are an abundance of hammock bars along most of the roads. What are these? Easy – just as they sound. Little cafes and eateries set up with mostly hammocks to lounge in, right along the side the road. You stop in, park the bike, lay back, have a coffee and relax for a while. We quickly came to find that these are a welcome break from the “numb bum” that you get after about an hour on the road. Much better than a plastic chair. We're totally getting more hammocks when we get home. 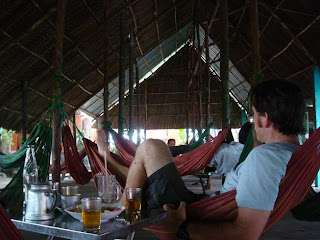 Posted by Courtney and Jeremy at 3:45 AM