Time frame reference - Early May. Ya, we know...

All three things that are easily related to London. Well maybe not all of them, but I guess we lucked out. We really only had one day of grey, drizzly weather, but even that wasn't so bad. After the 13 hour red-eye from Hong Kong we were lucky enough to have the opportunity to really get to know London's Heathrow Airport. For what was probably the third time in the past month, I had managed to leave a painting we bought in Vietnam on our transport. I think I've now covered plane, train and automobile. Of course the realization came as soon as we cleared customs and were all the way through security. What this meant is that we had a cool three hours to hang out in one of the coffee shops, pray that the kind cleaning crew from Cathay Pacific actually found and turned in our painting and that the airline was able to get it into the hands of their friendly ticketing agents. Fortunately for us all of that happened. I am no longer responsible for the well-being of the painting...

I have to say, London has enchanted us. Courtney has been here before, back in 2001 with Bolton, but this is my first time. I don't know if it's the just the magic of my first European city or if it really is this charming, but every street we walked down has been so full of character. We got in early Friday morning and basically walked all over the city until we left early Thursday morning. We took the tube and buses all over town which were very easy to use, especially when you get one of their pre-paid Oyster cards that grant you cheaper tickets plus the ability to just zoom through the gates with the simple tap of your wallet instead of stopping to actually buy a ticket.

We hit damn near all of the big touristy things to see and do. Day one got us to Buckingham Palace, Big Ben, Parliament, Trafalgar Square, the National Portrait Gallery, the London Eye, Westminster Abbey, St. James's Park and of course some room temperature, British cask ales to finish off the day. Just walking around, seeing all of these incredibly beautiful sites that you have read about in books your entire life is a bit enchanting. I was loving it. 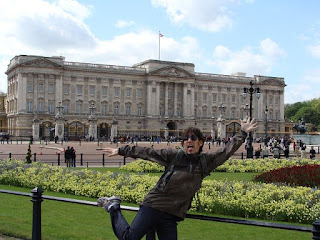 The next day took us on a wonderful, early morning (damn you jet lag) wander through Soho and the unfortunate realization that getting to see a Premier League soccer game was not going to happen. With tickets totally sold out online, our only options were Craigslist, ticket sites or other “discount” ticket shops. Too bad all of these sellers were calling for at least 100 pounds a person. As much as I was looking forward to a game, been dreaming of going, been praying to find cheap tickets... $300 for a game is just too much, especially when we're attempting to manage a budget. We were both disappointed (yes, Courtney was excited for the game too) but we found a more reasonable second place and went to the West End production of Wicked. We got tickets for the Saturday matinée show and it really was fantastic.

Post show was a trip over to Harrod's, the insanely huge department store with a parking lot that looked like the most luxurious auto dealer I'd ever seen. Meibachs, Porches, Ferraris – oh my! Just from the cars we've seen in this town, no matter where we've been, you can see that there is lots of money here. The trip through Harrod's didn't even get past the first floor, but hey, that's where the food court was. Now describing it simply as a food court is such an injustice. Sushi to baked goods, caviar to a Willy Wonka-esque candy room, fine wines, coffees and teas to fancy meats and cheeses, and for good (or bad, depending on how you look at it) measure, a Krispy Kream. It was an interesting contrast in that next to the hot food counter which was very good looking and quite reasonably priced were the baluga caviars going for 1,000 pounds an ounce. I don't think Courtney's mouth closed once as we slowly rolled by all of the luxurious displays full of goodies. I'm pretty sure she would have been okay with sacrificing a month of traveling for the opportunity to completely blow up the “food court”. Next time Honey, next time. 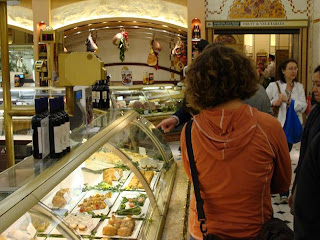 Sunday brought us back down to the River Thames for a visit to the Tower of London, a little culture at the Tate Modern Museum (nutso modern “art”, in my opinion), the Tower Bridge and many a pint at a local pub while watching the Chelsea – Arsenal game. 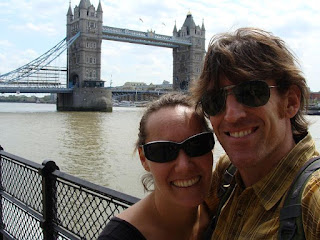 Greenwich was next on the agenda which offered a nice wander through Greenwich Park, but not a whole lot more. A trip up to Notting Hill the next day brought us some very respectable Mexican food but no Hugh Grant or Julia Roberts sightings. Oh well. Both areas were very charming and fun to walk through with lots of cute shops and such. Not a whole lot happened in either spot though. On Tuesday night though, we were able to see a play at Shakespeare's Globe Theater, down on the the River. We saw Frontline, a very racy play about intersecting lifestyles on the streets of London. Pretty entertaining but above all, the venue was amazing. Three levels of open air, in-the-round seating, all built in a very classic style. To see an actual Shakespeare play there (Romeo & Juliet is usually playing) would be fantastic.

Our last day in town actually kept us closest to home. We walked around Camden, the area where our hostel was. (Palmer's Lodge – very nice place if you're in town.) Again, another neighborhood that was full of charm and very pleasant to just wander around, grab a bite and get a view of the city from one of its highest peaks, Hampstead Heath.

I have to say, I hope the magic of this place isn't limited to London. I'm so excited to get out and see more of Europe. I know there are going to be so many more amazing places. And it's nice to feel excited and re-energized about being back on the road. Taking nothing away from South East Asia, we were both glad to get out of there, but we'll definitely go back. But for now, it's off to Holland to find the used VW campervan of our dreams that we'll call home for the next who-knows-how-long. See you out on the road. We'll be that broken down looking van going 35 in the right hand lane of the autobahn. Try not to cream us as you hit the on-ramp at 120 miles per hour.
Posted by Courtney and Jeremy at 7:49 AM