Ohhhhh - He have no ding-dong!

Wow, Bali is a trip!! It's very exciting to feel like we've stepped off the plane into another world, as both NZ and OZ were very Western and familiar. Immediately we were struck by the thick, tropical humidity and subtle smells of incense floating through the air as we walked off the plane. After getting completely taken by paying $10 for a cab ride into the hectic town of Kuta (which we found out after the fact), we settled in at a little homestay costing us all of about $8 a night. Granted there wasn't a flush toilet in our attached bathroom (you just pour scoopfuls of water down to flush, which is surprisingly effective) and it was a cold water shower only, but it was quaint and comfortable and we had a cool view from our oversized balcony. In this heat we'd prefer a cold shower anyway! 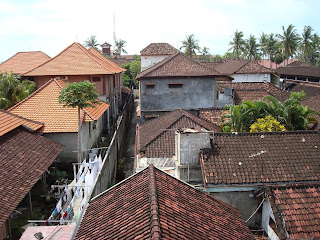 We soon discovered that Bali is a land of stark contrasts....huge, elaborately beautiful buildings on one side of the street, and shanty little shacks that may collapse at any moment on the other. The Balinese as a whole are meticulously clean, constantly sweeping their sidewalks and wiping down shop floors, while huge piles of garbage are dumped on the beach, side of the road, in a forest of palm trees, etc. The people constantly hassle you to come into their shop/restaurant/stall/massage parlor to have a look (it gets old quickly but you also get used to it and become immune quickly) but they are also the friendliest, warmest, most generous and giving people imaginable. Everyone you pass on the street greets you with a cheerful “Halo” and we had countless conversations with the locals, with topics ranging from “how HANDSOME Obama is!!” (the Indonesian women are really smitten by him!) to how only the Balinese could forge an entire fake Hyatt Resort, even down to the towels and robes.

When we both came down with nasty head colds, Nyorman, our favorite local from Candidasa, insisted on driving Jer on the back of his moped to the only pharmacy remotely nearby (in the next town over) so we could buy some cold medicine, then refused to accept any gas money for his trouble. He later in the week (once the cold medicine brought us partway out of our snot-filled stupor) took us on his little outrigger boat to discover some amazing snorkeling sites that we never would have found on our own, and then on the most incredible jungle trek up to his local temple, which was perched atop the mountain hillside next to our resort. I honestly thought he was kidding when he pointed to the top and said that was where we'd be going! It was a gruelling, near vertical hike (if that wasn't going to sweat the 'bad' out of us, nothing would), but it paid off ten-fold. The temple was beautiful and crawling with hilarious monkeys, and the hike afforded views of rice paddies, coconut plantations, misty cloud-enshrouded Mt. Agung, and neighboring villages, all with the deep blue of the ocean as a backdrop. Oprah would agree that the whole experience was one of those “Ah-Ha” moments that I'll never forget. Norman led us back down the mountain through a series of giant stair-stepped terraces where local farmers grow peanuts, and eventually to his own home. He introduced us to wife, and we all sat down to eat snakefruit together before he led us back with a generous bag of the weird, scaly things as a gift. Even then we had to fight him to accept our tip for his graciousness and help. 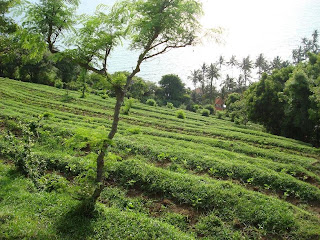 This is but one example of the many we heard while in Bali....our German hotel manager told us of when he first moved to the island and woke up one morning to a dead car, ailed with some sort of mechanical failure. His neighbor (who he hadn't even met yet) insisted that he take his car to work instead! When he arrived home that evening, his car was up and running and as good as new. When Jergen tried to pay him for the parts and/or his trouble, the man refused, slapping him on the back and exclaiming “We're neighbors!” That's just what you do.

I wish people were like that everywhere. Their sense of community also blew us away. After several nights of CRAZY rainstorms, the whole town of Sanur would be flooded: the elementary school next door, shops, homes, and just about every lane branching off from the main road. It seemed that the whole community would gather in the effort to pump unimaginable gallons of water out, a process they repeated every day for the whole week we were there. Nobody seemed upset or worried about it either. This must be a common problem during the rainy season and it struck me as another contrast. It's as if the Balinese don't value their time or skills the way we do. One would think it would behoove them to fix the problem once and for all, by building up the roads, etc. But no, they just follow the pumping process time and time again. The same goes for the handicrafts they produce: the most intricate woven baskets, bags, and boxes, beautiful hand-dyed batik fabrics, jewelry, art, paintings, etc etc all require a level of skill that blows us away. But it all costs next to nothing despite that! Even the daily offerings they put out in front of doorways and in cars (everywhere, really) are meticulous little creations of woven banana leaves and palm fronds, filled with fresh flowers, bits of food and sometimes amusing items like a cigarette, a few goldfish crackers, boxes of Milo, you name it. Each and every day we would see women patiently assembling these little beauties, as a freshie always replaces yesterday's offering. 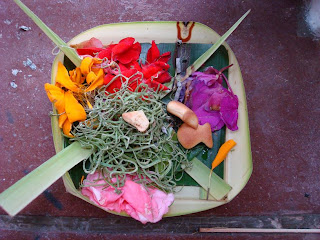 Even though Bali is a small island, we were only able to cover a fraction of it. Thanks to the anal Pacific Blue agents in Australia, we were locked into our departure dates for Singapore. It's the only place so far that we've felt we were robbed time-wise, and were very sad to leave so soon. We spent a few days in Kuta, a week in Sanur, a week in Candidasa, and only one night in Ubud, but would've enjoyed more time in each of those places, not to mention the many others we didn't make it to. A week doesn't sound like long, but given the hospitality of the Balinese people, both Sanur and Candidasa truly felt like home for the time we were there. We fell in love with New Zealand, but Bali was the first place we felt we couldn't wait to come back to in the future. 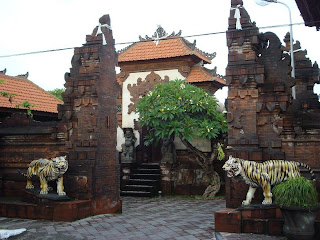 Posted by Courtney and Jeremy at 4:22 AM