So from the looks of it, we found one of THE places to be for New Years. Byron Bay, Australia, which is about 2 hours south of Brisbane on the east coast, proved to be somewhat of what I would envision as a miniature Las Vegas – just make it a small, surfer haven of only a few thousand during the off-season, minus casinos, add camp grounds. Come December you add in the “schoolies” (those who have just graduated from high school), the families on holiday and everyone else who has descended onto Byron for their holiday celebrations. Shake it up with a whole lot of booze, fun in the sun and holiday cheer and you have the makings of one of the most entertaining and potentially debaucherous New Years Eves on record.

We limped into town (Courtney literally, me because I was carrying both of our backpacks) and found a lovely little tent site next to the stagnant pond inhabited by the local monitor lizards, giant molting beetles and squawking bird life. 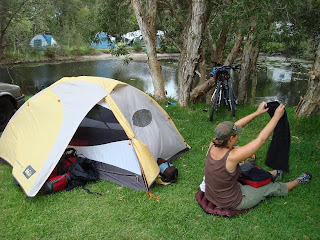 Tip number one – if you plan to go to Byron Bay over Christmas/New Years, start saving. One nights fare - for a tent site - was $75 AUD – two to three times what we were typically paying for a night in a campground. A CAMPGROUND!! Ridiculous. And this bargain priced accommodation was really the only place even available – partly because it was over 2km out of town. Fortunately a relatively inexpensive bike rental and a nice paved pathway made for a much easier commute into town.

The campground was fairly massive, with different “blocks” spread out over who knows how many acres. Or is it hectares here? Still not straight on that metric conversion. Each block consisted of a single-wide come bathroom facility, scarce areas of shade and throngs of drunken, party-going hipsters. It was funny to see the contrast in styles of camping from home to here.. Camping for us is usually a grungy affair – quick rinse in the creek in the morning if needed, camp fire circling and PBR swilling. Now there was no shortage of cheap beer consumption, but the pre-party primping was taken to a new level. If you will, picture a sorority bathroom (don't let your imagination run too wild with this thought) - heaps of girls filling every available electrical outlet with hair dryers, curlers, straighteners and the like, primping, make-upping, dolling up and doing whatever it is girls do before a big night out on the town. To see this taking place in the bathrooms, kitchens and laundry rooms of the campground was comical. Then a short while later seeing the newly glossed beauties heading out of their tents in high heels, miniskirts, bedazzled tops and glittery lotion brought it to a new level. Pretty sure that's never going to be a sight we see on any of our future trips to our favorite off-the-beaten-path camp sites back home.

So after our own trip to the local liquor store, necessary imbibing and successfully getting a couple of German teens completely trashed while playing Drunk Driver (Don't worry moms and dads, it's a card game.), we made our way into town to check out the scene. Down the bike path we go, efforting not to be tagged with a BUI, eventually we make our way to the main beach where the lights seem to be shining brightest. We weren't about to shell out the $80 to $100 that most of the bars were charging as a cover (per person!), so opted for the beach which was just as exciting. They really had gone all out – ghetto carnival rides, massive crowds of people stretching down the beach as far as the eye could see, lots of loud music, people being carted off by the cops and thank you Lord – a corn dog stand. The ringing in of the New Year itself was a bit anticlimactic, as there were no less then 15 separate countdowns going on at different intervals. No ball dropping, no Dick Clark and no fireworks to officially mark the arrival of Baby New Year. Oh well. We hung out on the beach and took in the scene, made our best efforts to avoid the drunken a-holes and called it a night without too much pomp and circumstance. 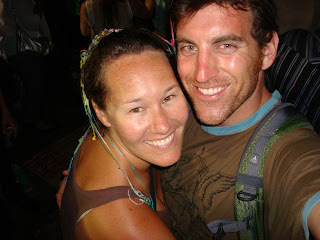 One of the additional pleasures was seeing the chaotic aftermath of the nights events. While making our way back through town, one really couldn't pass a street corner without seeing a group of decked out girls, sitting on the curb, crying about God knows what. Obviously something didn't go quite right with their BFF or Johnny Surfer Rockstar dude. Sad way to end the night. Say, aren't those the same girls who we saw primping at the campground earlier tonight? Come the next day, with the unfortunate lack of Bowl games to stare at in glassy eyed, hungover lethargy, we relaxed around the camp site and toured around town a bit. It was late into the day when we started seeing many of the previous evenings girls stumbling out of their tents, making their way in hurried fashion to the toilets. Sounds of hurling ensued. Say, weren't those the same girls who we saw crying on the street corner last night?

I think I see a pattern.

Byron also offered some great waves for me to attempt to look cool. Here was one try. 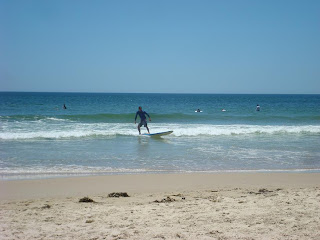 It also had a ton of really cool graffiti all over town. It seemed like every utility box, alley wall and open vertical surface had some cool mural on it. 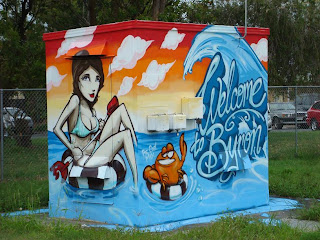 Posted by Courtney and Jeremy at 8:24 PM

The tone of your posts is great and you guys look so healthy and happy in the photos! Traveling suits you and it puts a smile on my face to see it.