Stop number one was to hit the chemist on our way out of Te Anau and load up on the Dramamine. After that we rolled about two hours up the Milford Highway, driving through cliffs and tunnels, and avoiding passenger attacking giant wild parrots until we dead-ended in Milford Sound. You really only go to the village of Milford Sound if you're going to go for a cruise on the Milford Sound. You're at the end of a 100+ km dead end road, no gas station, one bar, one cafe, one hostel and 300 meter cliff faces on all sides. You're getting on that damn boat! We spent a night at the hostel where Courtney managed to redeem herself on the Monopoly board and we did laundry. I told you, there's nothing to do there.

We awoke the next morning to thundering downpours that managed to whitewash the cliff faces and hills with waterfalls. Seriously, you couldn't scan ten feet from side-to-side without running into another torrent of runoff cascading down to the sea. There was even a section of the mountains called The Cascades that I think may more appropriately earn the name than our home range. The storm definitely added to the fun on the water too. It created what mariners like to refer to as “rough seas”. Us land lubbers like to refer to it as “Quick, clear the doorway. Courtney's going to puke!” Well, we fortunately didn't get quite that far in the anti-digestive process, but the rolling seas sure did make for some uncomfortable times.

The unpleasantness in no way detracted from the real beauty of the Sound. We were skeptical that the storm was going to ruin the two hour cruise in that the cloud cover wouldn't allow us to see the full majesty of the cliff walls and fjordland beauty. But as time went on through our trip we were more than happy to welcome the rain. The guide on our cruise of 15 or so guests told us that after a dry spell, there are normally four, count 'em four, waterfalls that are visible during the cruise. Literally, this day, there were thousands, many cascading hundreds of feet to the water below, falls that normally trickled down the mountains were thundering 75 feet out from the rock face. Not to mention the free, all-you-can-drink coffee and tea! All for about $50 a head! An amazing deal for truly unique and breathtaking sights that we'll be hard-pressed to match any time soon, but we're going to try anyways... in about two days.

Milford Sound was truly amazing, but of course we had to have a look at it's sister fjord, Doubtful Sound. So down the coast we went to Lake Manapouri. A 45 minute boat ride across the lake, a quick tour through the Lake Manaouri Power Station, a 45 minute bus ride down the sea level and ta da – Doubtful Sound. The quick and dirty on DS is this – beautiful and worth it, but I'd say that if you have to choose one, choose Mildord. The scenery of the shear cliff faces is much more dramatic at MS and frankly, I just think we got spoiled with the amazing waterfalls here as well. The trip on DS was very nice, good weather too, but it was much longer of a tour (6 hours on the Sound, plus the bus and lake travel) and the fjord itself was quite as majestic as MS. Two amazing trips though that really are must-sees on a trip to NZ. Damn this country is beautiful! 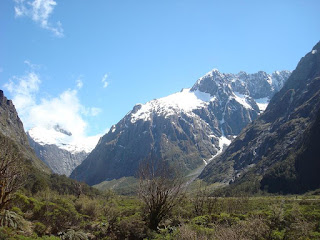 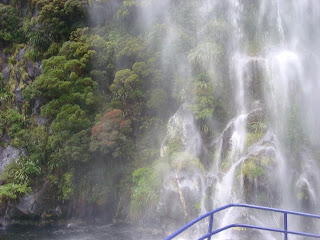 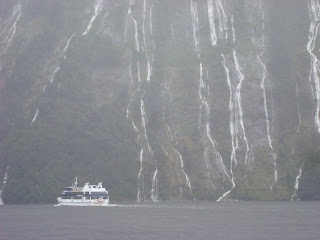 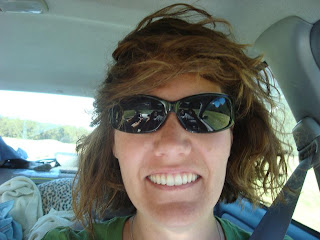 Courtney trying out her best Donald Trump impression, post hanging out the window for a picture opportunity.
Posted by Courtney and Jeremy at 10:01 PM