Wanaka & Queenstown - We love you!

It's amazing what a little sunshine can do for your motivation to get out and do things after long stretches of drizzle and grey. Our first four weeks in New Zealand definitely brought us more of the wet and dismal than the warm and bright, but no complaints... The same can be true I guess for the opposite, when all you want to do is sit down and soak it up.

We definitely ran into this “soak it up” mentality when we arrived in Wanaka and Queenstown, near the center of the South Island. Warm sunshine, no clouds in the sky and plenty to keep us occupied in these fantastic little ski resort towns. Queenstown especially reminded is of a Park City/Whistler/Tahoe vibe – Small town feel nestled right next to a gorgeous blue lake, lots of activities to keep the kids entertained (it's the adventure capital of New Zealand – think birthplace of bungee, paragliding, jet boating, skydiving, river rafting, etc...) cobble stone streets filled with shops and countless other places to just wander around and wish the day away.

We stayed in Wanaka for three days, not intent on even stopping before we got there, but as soon as we drove in to town we were hooked. 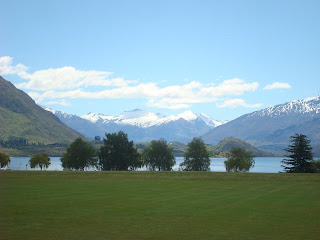 Though smaller than Queenstown, the feel was the same – lakeside ski town complete with waterfront views from our hostel, Cricket matches on the lawn out our front window and the attraction for adults and kids alike, Puzzling World. Feature number one is their amazing maze! Think of the corn maze out on Sauvie's Island over Halloween and then make it so hard that these two brainiacs were pushing on an hour and a half to get the hell out. Yes, the novelty had worn off by the time we finished... There were a myriad of puzzles, games, and magicy toys to play with in the lobby and several other “illusion rooms” to help prop up the $15 cover. Creepy rooms with faces that stare at you no matter where you stand, rooms built on a slant so that everything seems to travel uphill and makes people with equilibrium issues fall down easily (aka Courtney). This is stuff that you really are only supposed to see in Willy Wonka or Pawtucket Pat's factories, but without the Neverending Gobstoppers or rivers of beer. Your only real reward is the onset of a migraine headache from hours of puzzle solving and constant muttering of “how the hell did they do that?!?!” Well, I guess we did get a way with a few shots of us holding up the leaning tower on the front lawn. “Careful! It's about to go over!!” I can definitely see the Dads enjoying this place and it's well worth the stop if you happen to be in Wanaka soon. 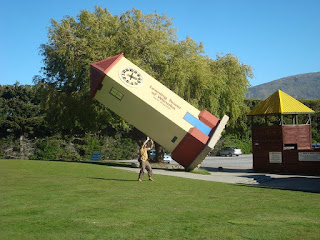 Queenstown was definitely leaning more towards the kid-in-you rather than the kids themselves. There was an awesome frisbee golf course, an overload of shops in which to shop (which of course Courtney took full advantage of, because, ya know... we needed more weight in our bags, right?), adventure sports galore and a mountaintop luge/go-kart type course. Oh, and there happened to be an excess of clubs and bars in which to intoxify your nights and early mornings away in. I guess it was also good that there was an abundance of greasy spoon cafes and a movie theater to laze the days away in too. 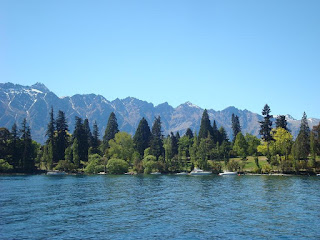 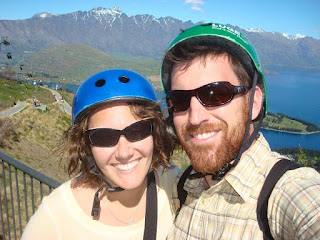 I think we both put this mountaintop pair of towns near the top of our lists for places to visit in NZ. We didn't do a whole lot that they had to offer, but we enjoyed the heck out of just being there. Wandering, soaking up the sun and relaxing for nigh on a week.
Posted by Courtney and Jeremy at 9:54 PM