The View From Our Back Door

After three weeks of ice cream, blue cheese cream sauces and Courtney and I not sharing meals (like we normally do now) in France with the Family Meibergen, then concert quantities of concert booze and concert food and then shifting it into high gear for three days in Pamplona, we were ready for a break. Nature was calling, and we didn't just have to pee. North we went to San Sebastian, along the Atlantic coast for some sunny beaches and good tapas. We found both and for two days we soaked them up, but this wasn't scratchin' the nature itch.

We headed west along the coast until we came to Llanes, Spain. Fortunately for us, back in Pamplona Bill the Brit had told Johnny the workout king who then told us about a great campsite up in the Llanes area called La Paz. Well we found it and Bill was right, simply amazing. Camping La Paz is situated right on the water on a fantastically terraced hillside. Pretty much every single site has a wonderful, unobstructed ocean view and makes you feel like you're camping right there on the beach. And this was only half of the greatness that this area had to offer. 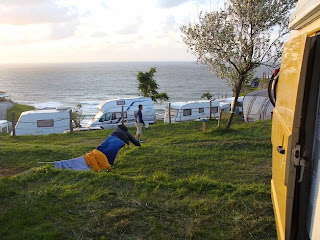 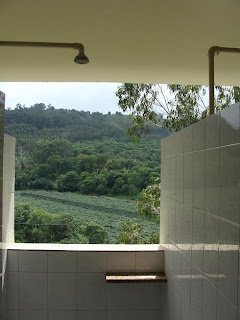 Not a bad view from the showers.

We were also right on the edge of the Parque Nacional Picos de Europa and what we found there was just as great as the grand camping status that La Paz had offered up. We drove into the park for about an hour, parked Floyd along the roadside and made our way to the Ruta de Cares trail. The trail runs from the little village of Poncebos and follows the Rio Cares pretty much as far as you want to follow it. You're in the middle of the mountains and the trail fires off at a pretty good grade right from the start. The valley that you're in is surrounded on all sides by steep cliffs that give you a serious sense of vertigo when you look up their faces at the the drifting clouds. After a while the trail works its way right onto the cliff faces so that your high side goes straight up the rock face while your downhill side drops of a sheer cliff. You've got your four foot wide path and that's it. 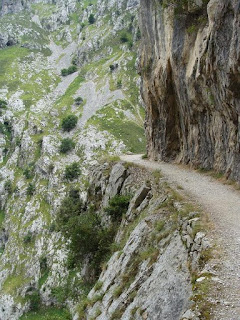 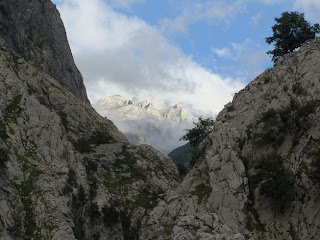 Posted by Courtney and Jeremy at 4:28 AM