I'm not sure how or when, but through the course of many email exchanges working out the details of our impending travels together, my dad decided the Meibergen/Buddress combination was heretofore to be known as Team Buddbergen. After much anticipation, Team Buddbergen finally reunited in Paris on June 23rd. We picked everyone (all whopping 3 of them: Mom Sheila, Pops Carl, and bro Ben) up in Floyd, who was thrilled to make their acquaintance, and watched in awe as Jer managed to effortlessly maneuverer us through the busy streets of downtown Paris toward our hotel.

The fun started with 4 days in Paris and we really packed it in. We visited The Louvre, the Orsay, and L'Orangerie, and those were just the museums! We saw Notre Dame and the Latin Quarter a few times, as the city bike tour we took led us back to the handful of sights we'd already seen. We had a hilarious tour guide and it was a fun experience, ending with an hour long river cruise on the Siene. We scored some amazing night shots of the Eiffel Tower as we cruised along, sipping on our bike tour boxed wine. 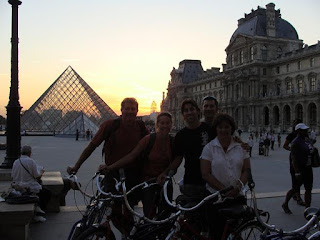 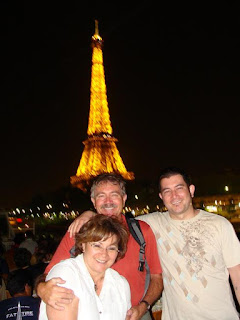 I don't think any of us were prepared for the amount of walking we did in those 4 days, covering all the main sights and neighborhoods. My mom and Ben were especially jet-lagged, as they had both come off of crazy work schedules (Ben finishing culinary school at the same time), and at one point my mom just had to crash and take a nap. My dad headed to Versailles and the three of us made our way to Montmartre and the Sacre Coure, scored a bench and had a great time (again) sipping cheap wine and people watching.

It soon became a joke/contest to see how many shots we could acquire of either of my parents snoozing, as it was the most commonplace sightseeing of all. It didn't matter if it was on the bumpy, shaky underground metro, or literally standing next to our bicycle tour guide, the rents were catching zzzz's, Parisian style!

Somewhere along the way, another competition erupted: the crustache contest. Both Ben and Jer have the good(?) fortune to be hairy dudes, so growing a mustache in the few weeks we spent together was a no brainer. I couldn't decide whose was scarier. Ben's little sparse, black strip of hair made him look just like the prepubescent Hispanic teens in 7th grade at Carson Junior High, who were an anomaly because NO ONE could grow facial hair at that age. Jer's was thicker, but didn't look that way because it was bright red and the way it caught the light made it look pretty sparse. I think the contrast of the red-stache to his dark hair made his a little crustache-ier because it just looked WRONG. The whole idea was awful and hilarious, especially since every day Ben would whine and plead that he hated it and please please could he shave it off. He had sworn to keep it until he deplaned and could shock and horrify his girlfriend Dani – I forgot to ask – did she get to see it? And now that I think about it, did we ever declare a winner? 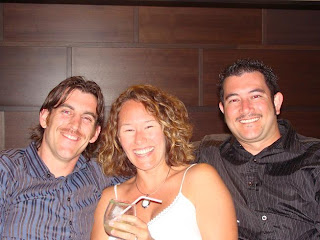 We had a few tasty meals in Paris, but the stand-outs food wise were the crepes and the glaces (ice cream cones). I couldn't decide if I liked the savory (ham, cheese, mushrooms, onions) or the sweet (banana and nutella) crepe more. The glace at Amorino takes the cake though. Not only do they serve it up in an appetizing flower-shaped concoction of multiple flavors, the ice cream is outta this world. It TOTALLY whoops the ass of the famous Berthillon ice cream if you ask any of Team Buddbergen!

After everyone was thoroughly exhausted, we made our way south to Provence, and specifically to a charming little town called Rognes. My dad had found a great little villa there for the week with an awesome patio and pool area.  It was such a treat for Jer and I to have the house and pool, that we stayed home from a few daytrips just to enjoy that. Each morning we were greeted by a gaggle of donkeys, which the neighbor brought over to munch on the grasses that lined the villa's driveway. My dad affectionately named a few of them, Monsieur Eddie is the one I remember most, and they were very docile and let us pet them and ride them bronco style around the lawn. Kidding! They did gratefully accept our offers of carrots and apples, however.

The only downside to our lovely villa had to do with the fact that it was a country house after all, and while that meant we had fresh lavender for our bedside tables, rosemary and thyme to cook with, and mint for our mojitos, it also meant that we shared the house with our fare share of creepy crawlies. None caused any real trouble, until one night when Ben glanced up from his book to find a quarter-sized spider chillin right by his head in his bedroom. We were already asleep, but awoke to Ben's frantic whispers of “Jer, umm, JER! Can you come help me PLEASE?!” Family vacations are all about getting closer, right? Well I learned that my 6'4” thickly muscled brother is a total and complete wimpy scaredycat when it comes to spiders and had to call on his brother-in-law to kill the spider for him! This I never knew, and unfortunately for him, I don't think any of Team Buddbergen will let him forget it.

I especially loved Provence.  Everywhere you turn, there are fields and fields of sunflowers or lavender, so it's beautiful and smells great! We checked out a few of the charming neighboring towns, including Uzes, St. Remy, Aix-en-Provence, and the Pont du Gard, an amazing old two-tiered Roman acquaduct, but mostly we just relaxed. True to Buddbergen style, we played games: cards or our newly aquired mental stimulator called Hive. We cooked some pretty fabulous meals too, a few of which were good enough to rival those of the famous French cuisine we sampled along the way (Ben is nearly graduated from culinary school, after all!) Beer can chicken was definitely a yummy and funny-looking highlight, as well as some tasty pastas and a throw-everything-we-have-left-and-need-to-use-up-together quiche on our last night that turned out to be scrumptious. And of course, there was no shortage of fantastic wine to accompany these meals. Our favorite was the Bandol Rose (Ros-ay...I don't know how to do the fancy accent over the E). Ros-ays from the Rhone Valley are fabulous....dry, zesty, and very refreshing. In other words, they are completely opposite their syrupy pink cousins that have such a bad reputation in the States. 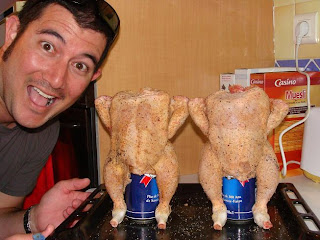 The last stop on the French tour was to again head south, to the coast. We stayed in a charming hotel called Hotel La Parisiana in La Napoule, about 10 or 15 minutes West of Cannes. I still miss the morning breakfast of dark, rich, coffee and the most exquisite, flaky crossiants ever to walk the earth. We always loved taste-testing the array of amazing jam flavors that came in itty bitty mini jam jars. Not exactly environmentally ideal, but adorable nonetheless. La Napoule was a quieter, smaller version of the madness of Cannes and it was just perfect. My favorite part was the night market that opened up each evening along the boardwalk. After dinner we'd grab a few scoops of our requisite glace dessert and make our way over there. We had so much fun strolling through the tables and booths, finding all sorts of cool crafty things and great gifts. We've seen our share of markets on this trip now, but this one never got old.

After a quick evening in Nice, where the fam was to fly out of at the crack of dawn the next morning, we were definitely sad to see the Meibergens head home!  In the beginning it was clear that all 3 of them were in desperate need of a vacation, which made for an interesting contrast to our well slept, relaxed lifestyle, but when they left they seemed relaxed and at ease. I think the vacation had done everyone good! I felt a little depressed for a few days afterward even though it was also nice to get back to “normal life” again with the two of us and our boy Floyd. We made off West along the coast to continue our adventures.....
Posted by Courtney and Jeremy at 2:26 PM