A much anticipated visit by the family Meibergen was just what we needed. With the exception of a few weeks in China with Murphy, we've been void of live and in person contact with friends and family for the past eight months. Our visit with Carl, Sheila and Ben through France was very relaxing and at the same time quite action packed. But this was only a warm up for the next few weeks of adventure.

Their 5:00 am wake up call was supposed to be our 5:00 am wake up call, but a crappy nights sleep, sore throats and apparent general lack of z's lately resulted in hitting the snooze button until closer to noon. Well, at least we got more than twelve hours out of our 33 Euro parking space in Nice – at least that was worth it now... So with a Big Mac in our bellies we hit the road. The pre-dawn wake up was supposed to get us on the road and bombing over to Bilbao, 1,000 km to the west along the northern coast of Spain, to a three day concert festival – Bilbao BBK Live – arriving in town just as the opening act started playing on Thursday evening. Well the late start, Pyrenees, low power-to-weight ratio of Floyd and sheer distance ensured our late arrival. So unfortunately we missed out on seeing the Ting Tings, Depeche Mode, (Michael - will you ever speak to us again??)The Editors and a few more. We were definitely sad we missed them all, but luckily we had two more days of acts to look forward to.

A night spent at another lovely French rest area left us refreshed and ready to rock. When we bought the tickets online back in May, while we were in London, we were stoked to find them for only 40 British pounds each (rather than the 150 Euro sticker price) and that included camping. What we didn't read in the fine print until the night before the show was that it was for tents only, carried in on the complementary shuttle bus, up at the venue. Floyd was unfortunately not going to be able to rock out with us this time. Anyways, we made it into town and eventually found our way to the over-sized parking lot where our high-top super van could actually fit. It was a great spot actually – right on the river in the middle of central Bilbao. And it didn't cost a dime. A nice stroll to the other side of the river, a complementary shuttle bus ride and few hundred feet in elevation got us to the venue that evening. The show was in a great spot on a hilltop just outside the city with an amazing view of everything below. Dueling stages were set up for quick transitions between bands, there was a grassy hillside that offered sunny views of both stages and the beers were large and cold, albeit 7 Euro a pop. 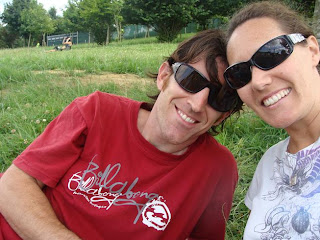 Friday night we were entertained by the likes of Supergrass, Babyshambles, Dave Mathews Band, Chris Cornell, Kaiser Chiefs, Jane's Addiction and Echo & The Bunnymen. For a while we were happy with lounging on the hillside, soaking up the rays, tunes and drinks, but the concert vibe struck us as the night went on. As we sat and watched the show we noticed that while one stage was rockin', the other was in transition for the next act and left almost totally void of fans. Well hell, if that's the case I think we have an opportunity to get up front. We've both seen Dave several times and absolutely love his live shows. Now we had the chance to see him from the front rail instead of the nosebleeds. So we went and stood at the front of the crowd, well, in the second row rather, and swayed to the sounds of Babyshambles that were pumping out across the lawn. We were also entertained by the drunken, obnoxious, please-foreigner-hook-up-with-me American girl who stood right in front of us. Classic entertainment. And of course, much to our pleasure, Dave's show, while only an hour and a half long, was awesome. The guy is so charismatic, funny, dorky and damn talented on stage. Plus Tim Reynolds played with them and they have picked up a very respectable replacement on the saxophone. Highlight show of the night for both of us. As for the rest of the night - Chris Cornell was rad when he played old Soundgarden, Temple of the Dog or Audio Slave songs, mediocre when he pulled out tunes from the new album (WTF was he thinking teaming up with Timbaland?!?!)... Kaiser Chiefs were really good... had never heard of Babyshambles before but they were good, Jane's Addiction was super lively and energetic and back with the original line up that included dreamy,shirtless Dave Navarro so Courtney was happy... there were super kebabs that weren't so super and enough free Modelo bandanas to last a lifetime. 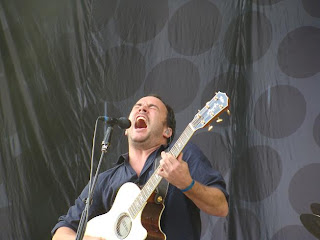 Saturday gave us the opportunity to sleep in, do a little grocery shopping and recoup a bit from the sickness that had hit us both. That night we made it to see the Phenomenal Handclap Band, Baddies, Asian Dub Foundation, Primal Scream and Placebo. Everyone put on a good show, but we especially enjoyed the Baddies (very British pop) and Phenomenal Handclap Band (quite an eclectic mix of sounds). Courtney and I were both a little tipsy and really looking forward to hopping in to the Guitar Hero tent that they had set up, but after seeing the guy rock the drums on expert and put the video game to shame, we shied away. I think our video game guitar skills are best left for Jimmy and Sara's living room. We opted out of the late night DJ tent both nights, but apparently it was open with x'd out concert goers dancing around in trancy goodness until 7:00 am each morning. More power to you guys... I'm going to bed.

We were able to have a nice bike ride around central Bilbao on Sunday. There is a beautiful old town area that is classically cobble stoned, narrow streeted and quaintly European, as was to be expected. The real highlight of Bilbao in terms of the touristy things to do is the Guggenheim Museum. It's as wild on the outside as you'd expect and according to the guidebook, much better to look at than what's actually inside the museum. Ya, we didn't go in. No time. We were off to our next destination – Pamplona! 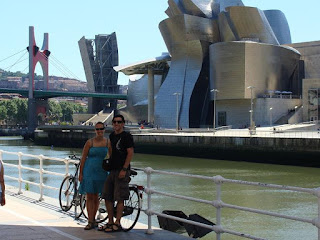 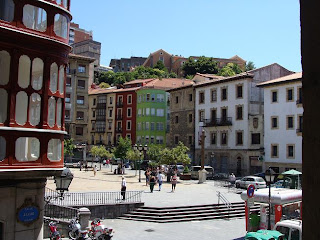 Posted by Courtney and Jeremy at 3:51 AM