I kind of felt like I was getting to live a real life Discovery Channel special. Finally, I was getting to see one of those amazing sites that they do hour long highlight reels of. The Petronas Towers are near – I can feel them! We jumped on the train, walked a country mile worth of transfer then hopped another train and voila – we're there! You walk out of the train in the basement level of what else, a giant mall occupying the bottom six or so floors of the towers and an adjacent building. Unfortunately we got there a bit late in the day to make the scheduled tours. They hand out free tickets each morning for tours at set times that run from 9:00 to 3:00. I guess we'll come back another day... Lucky for us, the mall had a Chilis and a movie theater. Sweet.

So after a few more trips to the KLCC mall (the Petronas Towers are a part of the Kuala Lumpur City Center master planned area that includes a huge park, pools, convention center, etc..) for another movie and a failed trip to the nearby Vietnamese consulate we finally made it for the tour. Well, I made it... Courtney slept in. After she'd witnessed my love affair and the ensuing hour-long photo session of the towers the day before, she decided she probably wouldn't appreciate the more intimate look (and undoubtedly hundreds more photos) the way I would. Especially given it required an early morning wakeup as well. Aka – she'd be bored out of her mind. Whatever! With the free ticket giveaway starting at 8:30 in the morning, a limited number of tickets, and huge popularity of the tours, it was highly advised by all that you show up nice and early to get in line for the tickets. I was up at 6:00, on the road by 6:45 and in line by 7:30. And yes, there was already a line – almost 200 people deep by that time. Good thing the iPod came with so I could wait for the opening with a few games of Klondike. It's a good time waster.

So 8:30 rolled around, the gate went up and the ticket handouts began. Depending on how things go, this could work out to be a long day. Each tour time has a limited number of tickets but the cool thing is that you get to pick your time once you get to the front of the line. Fortunately for me there were still spots available for the second session of the day, 9:15, by the time I made it to the counter. After a few minutes spent wandering through the small exhibit center that they have set up our tour was called. They sit you down for a short 3D (oooooooohhhh!!!) video on the Towers that turns out to be a 7 minute advertisement for Petronas (the national oil company and owner/namesake of the Towers). Then it's up the double-decker elevators to the 41st floor where the skybridge is located. I was a little bummed that we didn't get to go all the way up near the top, but hey, what can I ask of a free tour of such an amazing site? When you step off of the elevator you are told that you have exactly 10 minutes to explore the lower level of the skybridge. Essentially you have ten minutes to snap as many photos as you can, hoping that one of them turns out through the surrounding smog and fingerprint-smudged glass. Then, sooner than you can fill up the memory card on the trusty Sony digicam, you're being ushered back into the elevators and on your way back down. This tour runs like a well oiled machine.

Even though you make it less than half way up the towers, when you look out over the city you are still high above just about everything else there is. Looking up at the towers, down from the skybridge, finding a vantage point from anywhere around the enormous grounds, at night or during the day, the Petronas Towers really do draw you in. Their design is largely based on Islamic symbolism, so there's mystical allure to them that you can feel. We had three or four visits to the towers and every time we were there I had to snap more photos – finding a cool new vantage point or seeing some amazing new feature for seemingly the first time. While not quite as awe-inspiring as when we got to visit the upper reaches of the Empire State Building and Twin Towers in NYC a few years back, the Petronas Towers were an amazing site to visit. Hopefully I won't end up in a Dirty Jobs episode next week. 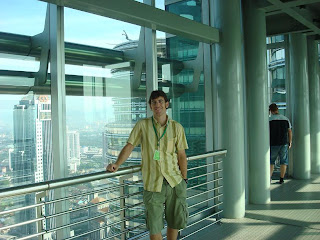 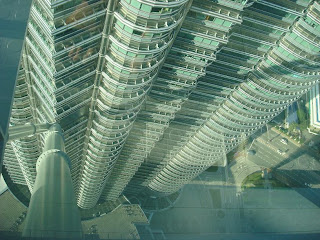 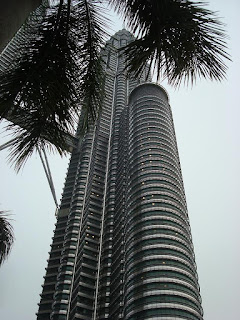 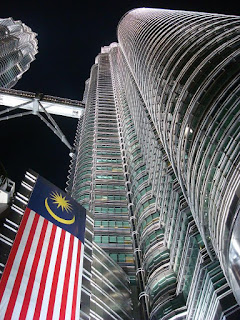 Posted by Courtney and Jeremy at 3:38 AM

That night shot of the tower is sweet.

i also like that shot. time for european shots.