After the rustic island paradise of Pulau Tioman, we made our way inland to Kuala Tahan and the Taman Nagara (National Forest) at the interior of peninsular Malaysia. Here the island paradise leaves the equation and you're left with rustic. Pretty much the whole point of going to Kuala Tahan is to make your way into the Taman Nagara and do a little exploring, so there isn't a whole heck of a lot there except what's needed to support the passers-through. It's a nice enough little town, albeit basic. From the main street you head down to the banks of the two converging rivers. This is where most of the restaurants in town are. Floating barge restaurants. All well and good until the rainy season comes, the rivers flood and rise 30 or so feet and your establishment is now two blocks inland and sitting on top of a half dozen parked motorcycles. Seriously, we saw the flood line markers. No exaggeration. . 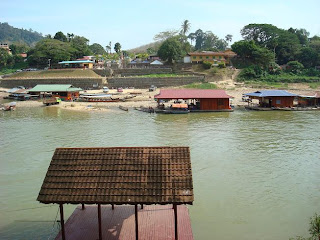 Now you can go serious-style and head into the 130 million year old jungle with ambitions of conquering a few of the 2,000+ meter peaks, or you can have a nice little walk over to the suspension bridge for some photos. We opted for an adventure somewhere in the middle, choosing to hike into the jungle for about two hours and then spend the night in one of the wildlife observation huts (bumbuns). We chose Bumbun Yong for our stay and made our way to the trail one afternoon. Now this wasn't quite as much of an ass-kicker as the hike over to Juara, but there were definitely a few sections of the path that were crazy steep and seemingly never ending. The few hour hike brought us to some massive trees, tree root staircases, nomadic jungle tribes, bat-filled caves and plenty of hot jungle. 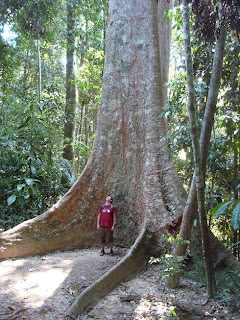 The hides are as basic of accommodation as you can get. They are little houses built up on stilts with a toilet, wooden bunk beds and a deck that looks down over the area where hopefully you'll spot some wildlife. Our place slept 12, but fortunately we were the only ones there. This bade well for walking around in our underwear while the sweat-drenched clothes had time to dry over the railing. We had brought with us enough food and water to get us through the evening and back to town by late the next morning. This consisted, of course, of Pringles, canned tuna salad (which was surprisingly quite good), crackers and a pre-buttered package of bread that DID NOT worry about sparing the butter. Oh God, there was probably a quarter cup of slightly banana tasting butter on each section of bread. Not so good a choice. 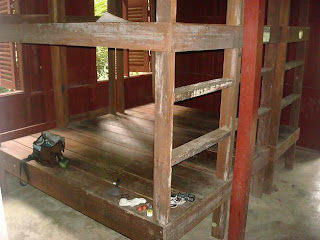 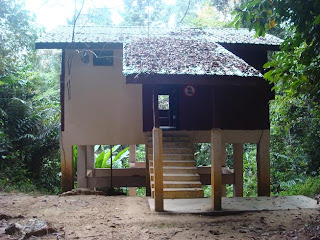 The evening consisted of lots of card games and the burning of several mosquito coils. We did get lucky and see a little bit of wildlife. A huge barking deer (yes, they sound like a dog barking when they call) made its way down to the watering hole in the early evening and drank a bit until it got spooked and ran back into the forest. The closest encounters other than that were the who-knows-how-many bats flying around inside the hide all night. They never got too close, but you could never really tell where they were so it was still a bit uncomfortable. There were also a ton of fireflies which were quite entertaining to watch.

A nearly sleepless night was assuaged by a few episodes of Family Guy and many a game of Klondike on the iPod, but alas, neither of those helped with the pain of bony hips on hard wood beds. Let's just say I was looking forward to daylight so we could make our way back to town. It was a fun little adventure – just you, a hard ass bed, creepy things going bump, screech, hiss, bark and crackle in the night and your thoughts. Well worth the sleepless night. Funny how we left our blow up sleeping pads packed away back at the hostel...
Posted by Courtney and Jeremy at 8:09 AM