KL was a pretty cool city when it comes to big cities. Probably the best one we've been to so far on the trip – minus Sydney, which is the one other big city that we feel we didn't get enough time in. While the majority of the population is Muslim, it's a big, western, go-shopping type city. Here are some of the things we found during our five or so days that we stayed.

- Malls malls and more malls. You honestly couldn't walk a block down any road without running into a mall. Some were very fancy with Gucci and Prada stores, some were dirt malls. While the extreme consumerism was a bit disturbing, it did offer some welcome conveniences. Movie theaters, Chilis, donut shops and coffee shops. Welcome to Anytown, USA.

- I got my first proposition. “Hey Mister. You want nice Malay girl? Nice Asian girl?” Being that we were apparently staying in Tranny Town, I thought I'd play it safe and politely decline.

- Malaysian people are awesome. I can't even remember how many times I was just standing around, wherever, doing whatever, and people would come up to me and want to, I guess, practice their English or maybe just be friendly to the obvious foreigner. They would ask where I was from, general questions about the USA (lots of questions about how expensive things were there), if I was married, how old I was and other small talk type subjects. Everyone was very nice and it was always an enjoyable experience to chat with them.

- There also is some unknown oddity about whitey-type foreigners that we couldn't figure out. One afternoon when we were outside the Petronas Towers snapping a few dozen pictures, a few guys from India came up to us and motioned with their cameras. Sure, we'll take your photo with the towers in the background. Um, no. Actually the request was to have the picture taken with me. Courtney ended up in the shot too, but we came to the conclusion that she was kind of unwanted. Each guy had to have their photo taken separately with me. Interesting.

- The first time we get on the monorail, of course some a-hole tries to pickpocket me. We sat down on the bench and he sat down next to me, on my right. His computer bag was on his lap and falling over onto my leg. Our digital camera was in my right cargo pocket and the string handle was hanging out, which was obviously a bad idea. He went right to work with his hand under the computer bag, working to undo the buttons on my pocket. Fortunately I felt something going on and pushed his bag over onto his lap and gave him a serious “What the f are you doing?” look. He gave what appeared to be a profuse apology in Malaysian, hand gestures and bowing included, then got the hell off of the train. Later, dick.

- It only took us about five months, but one thing is sure. In this part of the world, and by that I'll expand to all of South Pacific and South East Asia, lemon means lime. No matter where we go or how we ask for it, it always comes out green. And tasting like lime.

- The Batu Caves were pretty amazing. It's a group of Hindu temples, the largest of which is up 272 steps and set in a huge cave. You're huffin' and puffin' by the time you get to the top. The local girls soccer team that was “doing stairs” here was really putting us to shame. 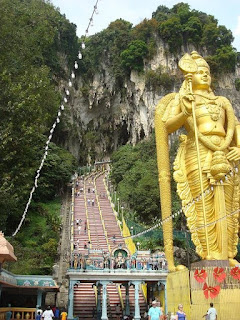 - Fish spa. Commonly found in anywhere from the local market to an upscale spa, it's literally a small pool filled with fish of consistent size; small ones being for the beginners, larger fish for the pros. Their “job” is to suck at your feet, ankles, and toes, removing the dead skin and leaving your feet all soft and pampered Well the guy running the show failed to mention that the varying fish sizes mattered and oh man, you shoulda seen Courtney tweaking out as those big guys sucked away! It tickles like crazy and is at the same time incredibly creepy feeling. She couldn't stop squealing and giggling like a schoolgirl. We quickly moved to the small fish tub, where Courtney enjoyed herself but I could only handle my heels in the water most of the time. That's one weird experience under the belt. Not for me. 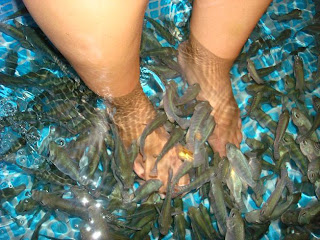 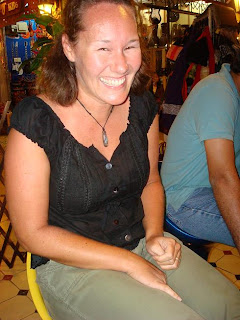 All in all, KL is a pretty damn cool city. Do stop by if you're in the neighborhood. 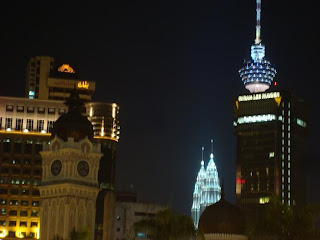 Posted by Courtney and Jeremy at 3:47 AM

I can't even imagine having little fish suck on my feet. That might be my worst nightmare! I freak out if a fish gets to close to me while snorkeling. Are those fish really better at getting the dead skin off than a foot file?

The Indians might be tourists as well and they are glad that you're also visiting the Petronas towers.