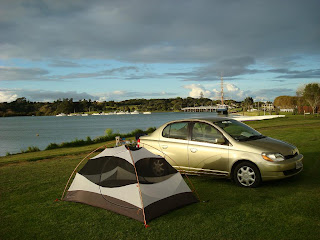 We'd like to introduce our new family member! His name is Ernie P. Dodger (pronounced Dodja). Ernie for when he's being cute, Dodja for when he's sassy, and the P comes from his license plate. He's a Toyota Platz (anyone ever heard of such a model??) and he's very spunky. We've both gotten accustomed to driving on the opposite side of the car, but driving on the opposite side of the road is another story completely. No scrapes yet, but only after a few attempts from Jer to drive us off the road. He's having a hard time getting used to his bodily position being so far to the right in terms of the lane. (I, on the other hand, have a perfect driving record but I won't let him proof this before posting as he may say otherwise!) Driving in the country is no problem since you're just going, going, but handling all the traffic and roundabouts in the towns and cities really gets the blood flowing!

Ernie will be a part of the family for the next month as we continue to tour both islands. He's packed to the brim with groceries and gear, and we've gotten lazy enough that we set up the tent next to him and use his boot as our closet!
Posted by Courtney and Jeremy at 2:00 AM