Fun with Foreigners, Part 1 of Many...

Here we are in Russell for a few nights, which is a sleepy coastal town in Northland, packed with charm and beautiful views. So far we've stayed at three holiday parks, which are like big, fancy trailer parks. They range from simple, grassy lots with basic kitchens, toilets, and tent sites, to sprawling, meticulously landscaped grounds with pools, hot tubs, flat screen TV lounges, and anything else you can imagine. So far all have cabins and condo type spaces you can rent in addition to tent sites, and many house permanent residents in their 'caravans' which could be a shabby trailer or a pimped out RV.

Our first night out on the open road led us to a holiday park in Mangawhai. We found a beautiful spot to pitch our tent, right on the river and surrounded by flowers and bushes. It was very peaceful and quiet but WET!! It feels like we're still in Oregon with the amount of spring rain we've been getting. Each day gets warmer and sunnier though....summer is definitely on its way. The lush landscape reminds us a bit of home as well, but with a touch of tropical Hawaiian flora and fauna thrown in. It's breathtaking.

We continued up the east coast toward the Bay of Islands and spent the last two nights in Waitangi, near the Waitangi National Reserve. We met several fun friends at the holiday park there, played cards each night and taught them all how to play Asshole (you Oregon Staters know that game!!). We drank far too much wine but had a blast with them for a few days. There were several people from Holland, a few Germans, a funny Irish guy, and a hilarious girl from the Czech Republic. They were all several years younger but have traveled so much! So hey to Erik, Monique, Dan, Meerka, Sebastian, Irina, Luuk and Frank! It's amazing to hear, at typically only 23 or 24 years old, about the experiences they've already had. It was also invigorating to get a perspective from them on the world view of America. No more late night politics talks though! We hope to run into them again as we continue our travels.

We've been doing quite a bit of hiking through all sorts of terrain....into caves, up and down to waterfalls, through Mangrove forests at low tide....to fields where calalillies grow wild and get enormous! We'll include a few pics below but will try and get more onto Flickr soon. Tomorrow we take a sailing trip around the Bay of Islands. More to come on that soon! 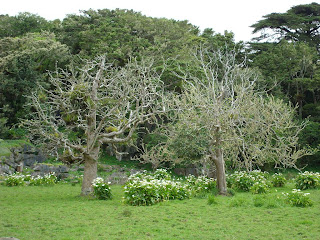 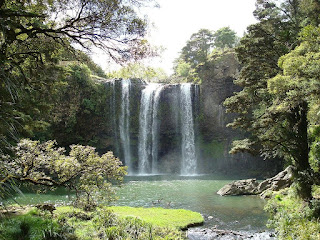 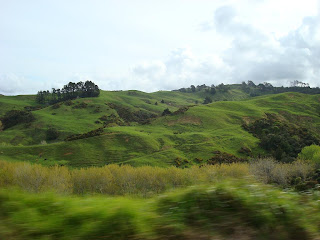 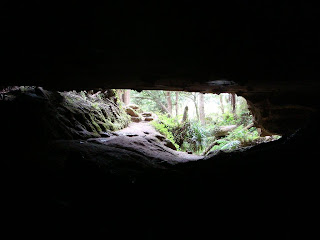 Posted by Courtney and Jeremy at 2:05 AM

That waterfall pic looks like some kind of Shangri-la! Amazing.

Jer, if Courtney gets too cutesy with the car description and local lingo ("boot", etc.) you're going to have to step in at some point.

Courtney - to be fair, I love your descriptions and recaps. Great travel writing, girl!

Seattle weather is awesome right now, by the way. Oh and I have a 1:1 with my manager today, and get to process 38 TPS reports...so how about them apples!? Jealous yet?

Love the updates!!! Sounds like things are going well and you guys are getting adjusted quite nicely. Keep the updates coming :-)