Running? With the Bulls

The slam of Ricardo and Yolanda's car door next to us woke me up, at 8:00. SHIT!!! The bulls are released at 8:00 and we're at least 20 minutes from getting there, even if we haul ass. I ran over to Jonathan and Courtney's tent - “Dude, it's 8:00!!! I slept through my alarm!!! FUCK!!!” “Uggggg...” was the response I got. Well, back to bed I go. Talk about pissed. And not only pissed, but I was feeling terribly guilty about being the one with the wake up call and sleeping through it. And it was the last day of the festival so it's not like we could just do it tomorrow. Plus, Rick and a few other guys from Holland had left us a note to please wake them up when we got up in the morning to go running. DAMMIT!!! 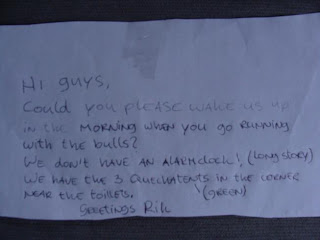 I had totally blown it. I can honestly say that this is the one thing that I truly regret on our trip so far. I had the chance to run with the bulls and I chose to party all night long instead. I'm an idiot. I really hated myself that day.

But as pissed as I was, I apparently wasn't going to let it ruin my day. While (my) Courtney laid in the van, hungover, watching The Hangover on the laptop, Jonathan, Kevin and I were at the bar doing tequila shots and drinking beers. I guess it helped to numb the pain a bit. We couldn't let the trip to Pamplona go to waste, so we opted for the next best, most authentic event of the festival – the final night of the bull fights. Honestly, this was not something that either Courtney or I really wanted to see, but we weren't going to judge before we saw it. As it turns out, it was quite gruesome and hard to watch at some points, but at the same time quite graceful and you could see the great tradition of which the sport was born. To the bull fight, we can now say “Been there. Done that.” Don't have to do it again. It actually gives Courtney nightmares sometimes. 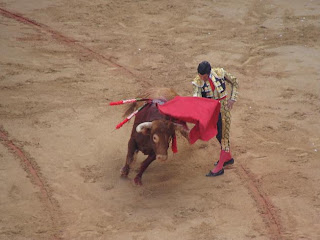 So we made the best of our last night in town. We still had a few cocktails but managed to tone it down a little. Jonathan and Courtney bombed out of town at around midnight to go meet up with a friend in France and Kev stuck around to “pursue other ventures”. We passed out for a long snooze after two hard days of liver abuse. Other entertainment highlights from Pamplona included touring the beautiful Airstream trailer of Bill the Brit (plusher than plush could be) and sitting, wondering curiously, with beer in hand, why the three guys across the way were going full force into their workout routine that would probably have made me puke on my best day. One armed push ups, upside down push ups, bending steel, lifting cars, knocking over trees... We hung out with the guys later on and they were actually really cool, we just all agreed that nope, not on our holiday. 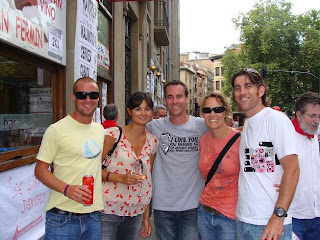 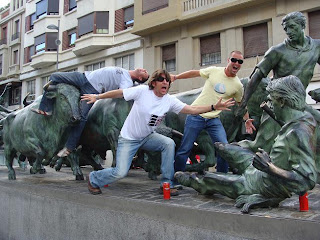 So now I'll probably end up like Billy Crystal, running with the bulls when I'm 50, coming home with a new a-hole. Overall Pamplona was awesome, but could have been the probable highlight of the entire trip if only I wasn't such a dumb ass. I guess it was especially cool since it wasn't even on the itinerary until a few days before we rolled into town. I'll try hard not to regret too much the things that almost weren't even possible anyways. I'm looking on the bright side.
Posted by Courtney and Jeremy at 4:18 AM

Well, it's something to look forward to. I loved the story and it made me laugh and tear up at the same time. I fell in love with Spain and would love to come back. Maybe we could catch a bull fight e.g. in Granada!

Oh, and I love the picture! Very creative:)

I am very happy to keep track the thing that I used to do. many thanks for sharing. impressive page indeed.

Thank you for sharing this! Just what I’ve been searching for. Great info!
Logo Design

I must appreciate your post which is helping us in such a great manner.
0844 telephone numbers