It's classic Courtney and Jer travel planning. Not until we are on the way to Bilbao do we realize that (say it really fast like you're really excited about it) “Hey, after the concert we can bomb down to Pamplona and catch the end of the San Fermin Festival (aka the Running of the Bulls). Theeeen we can bomb down to Barcelona and catch the Tour de France. We can paint a big Livestrong logo on the side of Floyd since he's the perfect shade of yellow and go kick it with Lance. Sweet!” Knock knock. Who's there? Reality checking in. You already missed the Spanish legs of the Tour. Better luck “next time”. “Next time”... an unfortunate recurrence in this story.

So out of Bilbao we go heading to Pamplona. With the GPS set on “no toll roads” we have a wonderful tour through the Spanish hill towns. It was surely a slower go than taking the highways, but so much more enjoyable. We passed through some of the cutest little villages, often only at 20 km per hour with the steep hills, and by some of the most picturesque sunflower and wheat fields you could imagine. 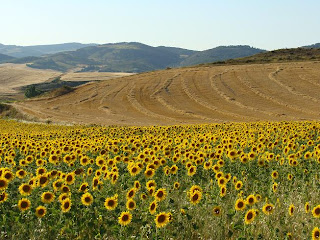 Rolling into the campsite outside of Pamplona that evening we were greeted by crowds of sangria soaked festival goers, bus loads full of travel-Europe-on-a-bus-in-a-drunken-haze ala spring break twenty-somethings and plenty of Euro-pop, oonce'ing its way out of the stereo at the bar. Apparently we arrived at the right time. San Fermin runs for one week, and we got there on day five. We got in a bit late that night so we had some dinner and relaxed before bed.

The next morning we were up bright and early, ready to catch the 7:15 bus into town. We made our way into the bull ring, as opposed to trying to cram our way along the path that the bulls run through town, and got to some empty seats in the upper deck. A bit short on the requisite all white outfits with red belt and bandanna around the neck, we stood out a little in the crowd. Sorry, my white pants were at the dry cleaners. They had a big screen that would scroll through all of the stats for the bulls that were running that day – Vandalico, 550 kg... Oficial, 535 kg... Incapaz, 615 kg... Suenomio, 635 kg!!! Courtney and I had talked the night before about whether or not I would actually run with the bulls. My answer was yes, I would love to be a part of this amazing experience, but knowing absolutely nothing about it, maybe we should watch from the bull ring the first day. Now that we're there and seeing the size of those mothers... holy crap. So aside from the frightening tale of the tape that they had scrolling on the jumbotron, there was a band down in the bull ring entertaining the audience as well as several bands in the crowd that would burst out in song every few minutes. The crowd was always chanting and singing along, so festive and everyone was in such a great mood. No doubt largely enhanced by the vast quantities of sangria that are consumed on a minute-by-minute basis.

To start the events off, there is a traditional chant that all of the runners do, praying to San Fermin for their health and assuredly their hides as well. A giant bottle rocket is shot off to signal that the bulls have been released from their pen and that you need to start movin' your ass. Then another rocket goes off to signal that all of the bulls are actually out of the pen and that you're about to get trampled. They have a flying camera on a wire, akin to those you find in NFL stadiums, that follows the path of the run all the way into the bull ring and that is beamed onto the big screen so everyone in the stadium gets to watch the action. About a minute and a half later the first runners trickle into the ring, then they start to flood in, then the six bulls run into and directly out of the ring, led and followed by the tender-bulls that are used to guide the ornery (ie non-castrated) bulls on their journey to the ring. A third rocket goes off signaling that the bulls have entered the ring and then quickly a fourth and final rocket goes off to signal that all of the bulls are safely out of the bullring. Man that was exciting! Let's go home.

Not quite. Now comes the entertainment for those of us who were sitting patiently in the bullring through all of this running excitement. First off, Juan Madden gets in the control booth and starts going wild with the instant replay. All of the prime gorings and tramplings from the run are reviewed, in slow mo, forward, back, highlighted with a little bubble where each guy took a hoof to the nuts or a horn to the rib cage. This is on par with good old American trash TV. Once they've finally run through all of the good footage, the live entertainment starts. One at a time, while all of the runners are still in the bull ring, they let another bull loose to play with everyone. This guys is smaller, has corked horns but is still feisty. Here's the chance for all of the runners who felt that they didn't get a big enough thrill on the run to see what they've got against a live bull. It's not so much that they do their best matador wannabe moves, rather they run by the bull and smack him on the butt or get in front of him and try and juke him out as he charges. The pros will run and dive over the bulls for a good cheer. After five minutes or so they trot a giant, calm herder-bull into the ring and he rounds up the wild one. This goes on six times and after an hour or so the show is over. 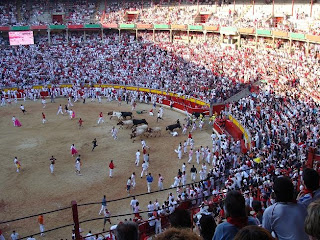 As a new bull is released into the ring, all of the crazy folks will lie down in front of the doorway so that the bull jumps over the pile of people. Usually the pile gets so big that bulls only make it about half way across the pile and have to jump off the people mid-pile. There was one guy who was kind of the all-star of the show this day. An obviously western guy with big blond dreads rolling down his back. He stood out because of the hair, and because he wasn't in uniform, so you would always spot him when he got close to the bulls. One time he got a little too close and the bull ended up with his backpack hanging off of a horn. That brought a big cheer from the crowd. He got it back eventually and continued to test his fate as the bulls kept coming. One time he got kind of tangled up with the bull and kind of had to hold onto its head and horns to keep from getting gored. Now this, if done on purpose, is a big no-no. There is definitely a certain etiquette to interacting with the bulls, and touching their heads is highly frowned upon. But then again, if it's the only thing you can do to not get totally trampled then go for it. But some folks in the ring didn't think that Dreads was playing nice and went after him throwing haymakers. I don't think they landed any, and things got broken up pretty quickly. The most entertaining part of the interaction was when the cops then dragged the angry Spaniard who was ready to fight over the wall and out of the bull ring like a ragdoll. That got the biggest cheer of the day.

One of the funniest things to watch was when the bulls would clear the wall. Now the runners who are seeking refuge would jump over the wall of the bullring, out of harms way. The walls would often get lined with people who didn't want to look scared and actually jump over the wall, but didn't want to get in the middle of the ring to tangle with the bulls. The bulls would often drop a horn and run along the wall, forcing all of those taking a rest to flee in an instant. It was like a mini wave. Hilarious. After all six bulls had their chance to run around with the guys in the ring, we made our way out to the streets of Pamplona. We wandered the streets for a while, up and down the path that everyone runs and just took in the sights of old town Pamplona. An obvious highlight from our walk was the helping of warm churros and thick, chocolate dipping drink that we munched on. Mmmm... churros... A little shopping and a bit more wandering and we were back to the campsite by mid day. Time to do laundry.

A little while later we got some new neighbors – Jonathan, Courtney and Kevin – travelers from OZ and NZ – coming to Pamplona to see what all of the excitement is about. Well, Kev had been to Pamplona earlier that week but he was back to pursue his aspirations with the pretty bar maid at the campsite. Go Kev! We hung out all day and after several bottles of sangria, several bottles of wine and a few beers we were heading back into town to party. Downtown was so lively and everywhere you went there were people chanting, singing and loving the overall merriment of the evening. Every beer seemed to be at least a litre, so things got fuzzy quickly. What was very clear to all of us now is that the boys were going to run with the bulls tomorrow. The Courtneys weren't quite game, but they were down with grabbing a ringside seat and taking lots of photos of us hopefully not getting a new hole. I was much less apprehensive about running too, since I now had some buddies to do it with. All we had to do was wake up at 5:00 am, IN TWO HOURS, so that we can make it to town on the 5:30 bus and get there in time to get onto the path before the officials lock it down. Let's just say we should have stayed up all night. 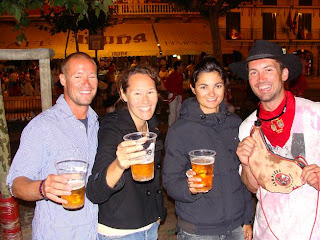 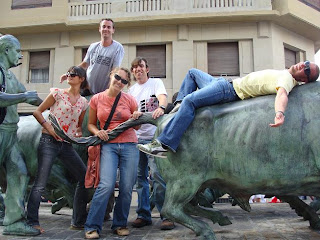 Posted by Courtney and Jeremy at 4:07 AM

I am very happy to keep track the thing that I used to do. many thanks for sharing. impressive page indeed.